Deakin University researcher Dr Mazher Mohammed has helped to make a dream come true for an Australian woman who lost her left ear in a car crash 55 years ago, when she was only 15.

Ms Colleen Murray is the first person in Australia to receive a new ear through the use of three dimensional (3D) printing – and is delighted with the results.

In a story produced by Channel 7 News, Ms Murray told her doctors: “I was born with two ears and I've wanted two ears and you've done it for me.”

Her prosthetic silicon left ear attaches to tiny titanium rods implanted in her skull. It was created by prosthetist Brenton Cadd at the Royal Melbourne Hospital and a Deakin team, who used a medical CT scan of her right ear to produce an accurate model that was printed on Deakin’s Connex3 500 3D printer – one of only two such printers in an Australian university.

“This technique has achieved like-for-like, near 100 per cent reproduction of the patient's own anatomy. You just can't ask for better than that,” Dr Mohammed said.

“We believed Colleen to be an excellent candidate for the technique we developed and the results speaks for themselves.”

“This project was conducted using school resources as no funding was available to us, but, given the potential benefits to Colleen, it was an easy decision to make. We hope the positive outcome will attract funding to this work so we may develop the technique to become part of routine clinical practise.”

This development is one of a growing number of medical milestones that 3D technology is bringing to the world. Printed prosthetics for arms and legs are becoming increasingly common, bone replacement devices have been created using titanium printing to replace cancerous vertebrae, heels and other bones; and it is expected that complex tissue, muscle, bones and cartilage through 3D bioprinting could be a reality within the next five years.

Recent examples, working alongside collaborators at the National Institute of Technology, Warangal, India, include the design and production of a titanium jaw implant and the design of a patient-specific dental implant that was recently surgically implanted into a patient’s jaw.

Originally from the UK, Dr Mohammed joined the University 18 months ago as a Research Fellow in Advanced Design and is part of a growing interdisciplinary team of Deakin experts in bioengineering and medical device technology. He noted that Deakin is playing a pivotal role in developing 3D technology in Australia.

“Deakin identified the potential for this technology at exactly the right time,” he said.

“In the School of Engineering, thanks to the vision of the previous Head of School, Professor Guy Littlefair, and our Interim Head, Professor Ian Gibson, we have invested in a comprehensive suite of world class 3D printers and design technology.

"These have unlocked a wealth of research possibilities at Deakin, ranging across high impact sectors, such as medical, automotive and sports technology, allowing us to construct complex designs and to 3D print these in a wide variety of common engineering materials.

"We can even potentially print living cells with the 3D bioprinter that we purchased last year, which was Victoria’s first commercial 3D bioprinter within a research institute.” 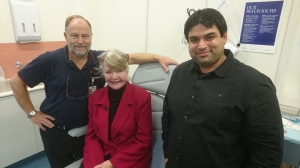