Research with a difference for reproductive health

Earthquakes and border blockades are uncommon barriers to completing a PhD, but a Deakin researcher has overcome them both.

Tricia Ong’s is “not your usual research journey” in more ways than one. In her efforts to improve reproductive health among trafficked girls and women in Nepal, she lived through earthquake aftershocks and faced fuel and food shortages.

Ms Ong, a PhD candidate with Deakin University’s School of Health and Social Development and the recipient of an Australian Government 2015 Endeavour Research Fellowship, worked with a small group of young women who had been “internally trafficked” into the sex industry from rural regions  of Nepal to the capital, Kathmandu.

Ms Ong’s love for Nepal and its people began while she was trekking the Himalayas in 1987. She returned in 2011 as a volunteer on an art therapy and women’s reproductive health training program with trafficked women.

“It was the women’s reproductive health issues and the women’s stories that drew me in rather than the art therapy,” she said.

“I wanted to go back and do something for the women that would have an impact and a sustainable outcome. I decided on a PhD because I could publish my findings and benefit young girls who have been exploited.”

Ms Ong explained that although statistics are extremely difficult to obtain, approximately 35,000 women and girls are trafficked from Nepal’s rural regions into brothels, cabin restaurants, dance bars and massage parlours in urban Kathmandu each year. Around 10,000 to 15,000 are trafficked across the border into the sex industry in India.

“Trafficked Nepalese women are one of the most marginalised populations in the reproductive health sector due to the stigmas they face for having been involved in sex work,” Ms Ong said.

Ms Ong’s research took a novel approach in which the women, aged 14 to 22, were asked to demonstrate their knowledge of reproductive health by depicting in clay aspects of their reproductive bodies such as menstruation, pregnancy and childbirth, and male and female genitalia.

During 16 workshops with the women, Ms Ong, colleagues from Nepalese women’s health organisations Asha Nepal and the Centre for Awareness and Promotion Nepal and a young female Nepali research assistant, collected data through the workshops, audio recordings and photography of the participants’ sculptures.

“We wanted find out what the women knew about their physical body, such as how and why menstruation, pregnancy and childbirth occur. We discovered much more, like emotional and cultural issues, such as son preference and the fear of giving birth to a daughter, the role of men and women in Nepalese society and attitudes towards and knowledge about sex.

“We also discovered the source of their knowledge. Sometimes it came from education programs in schools, sometimes mothers and peers, and sometimes health clinics.”

Ms Ong said the study revealed the women had surprising knowledge of aspects of reproductive health, but that not all their knowledge was correct.

“They have unique needs because they know a lot through experience, but they maybe don’t understand exactly how it all works, or how to protect themselves.”

The nature of the women’s life experiences alone would have made for a harrowing research experience, but the whole project was complicated by the aftershocks of the April 2015 earthquake in Nepal, which devastated communities and killed thousands.

When Ms Ong landed in Kathmandu in November 2015 to begin her fieldwork, the city was in the midst of another humanitarian crisis, with a blockade on the border of Nepal and India resulting in shortages of food, fuel and medicine.

“It was winter and there was no electricity for up to 16 hours a day and no fuel for the backup generator,” she recalled.

“My research assistant was transcribing interviews at three o’clock in the morning to take advantage of the brief hours the electricity was on.”

Despite the tough five months of fieldwork, Ms Ong’s work will continue beyond her PhD submission.

“One of my big hopes is that it doesn’t end here. I’d really like to use my experience to consult to the United Nations Population Fund because reproductive health for marginalised women is on the global agenda,” she said.

Ms Ong said she was grateful for the ongoing support of her supervisors, Professor David Mellor and Dr Maria Pallotta-Chiarolli from the Faculty of Health, Deakin’s Human Research Ethics Committee and the Nepal Health Research Council for enabling her to undertake such culturally-sensitive research.

“It was life enriching, inspiring and challenging, but the learning is still unfolding. Every time I go back to Nepal, there is something new to learn,” she said.

Listen to Tricia Ong talk about the beginning of her fieldwork in Kathmandu. 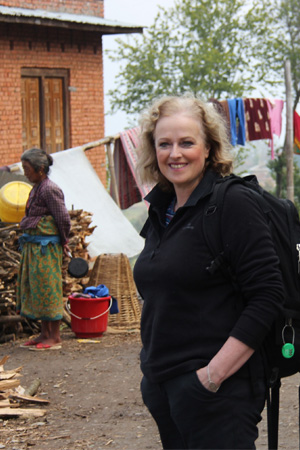 Deakin researcher Tricia Ong worked with marginalised women in Nepal for her PhD.

Come along to the Higher Degrees by Research Information Session at the Burwood or Waurn Ponds Campus organised by Deakin's Graduate Research Academy.

Paul Levy, a former 'CEO extraordinaire,' is a Thinker in Residence at Deakin.

A new book reveals how technology can engage patients in their own health and medical care.