Over the past 18 months, high-resolution agricultural data has been more readily available in Australia, thanks to a significant increase in the use of drones.

Associate Professor John Hornbuckle, from Deakin University’s Centre for Regional and Rural Futures (CeRRF), with funding support from the Cotton Research and Development Corporation, has been investigating the use of drones and satellites to monitor crop performance and inform water management decisions.

“Information collected from drone and satellite-based platforms can now be used to gain new insights into the effects of water and nitrogen management on plant growth,” Associate Professor Hornbuckle said.

“From there, growers can develop strategies to maximise yields across the farm, based on analysing the best and worst-performing areas.”

His research has identified significant improvements to technology, such as the recently-launched Sentinel 2 satellite, which has the ability to monitor the health of crops and track their water use via the use of red, red edge and near infrared photography. Developments in satellite imagery mean that farmers can gain a picture of plant health right across fields. For instance, specific elements, like nitrogen and chlorophyll content of crops, can be measured from the satellites.

Associate Professor Hornbuckle said the data is freely available across Australia and offers “the potential for irrigators to gain insights into their crops’ performance, which had previously been unavailable for everyday growers.”

Increasingly, this detailed information is now also being collected by drones rather than satellites, with more affordable pricing of drones (costing less than $2000) improving accessibility for farmers. There will also be potential for fully-automated drone flights to collect high-resolution aerial data in the future.

Previously, detailed data about water and nitrogen levels in crops were obtained by scheduled plane flights or a satellite overpass.

“One of the major advantages of using a low-cost drone platform is the ability to take images when you want,” explained Associate Professor Hornbuckle.

This customisation allows the farmer to monitor patterns and changes more closely; for example, planning a fly-over during key irrigation times. Other benefits include quicker access to the data and higher quality images – providing more specific information. This can translate into “potential benefits for identifying weeds, and allowing effects of events such as soil compaction from wet harvests to be seen in collected images”.

The Deakin team has been working with drone sensor providers such as Micasense to show how these new drone-based camera systems can be used to improve farm productivity, including better use of nitrogen fertilisers.

"Being located in regional Australia in Griffith, in the heart of Australia's irrigation area, really focuses our research and it’s great to see this technology being developed in conjunction with irrigators and end users," he said.

Along with research partners CSIRO and the New South Wales Department of Primary Industries, Associate Professor Hornbuckle has also released the IrriSAT app. Available as an easy-to-use cloud based app, it uses satellite images from the Google Earth Engine to provide water management information that assists farmers’ decision-making for irrigation management. The data can also be used for crop productivity benchmarking, tracking soil-moisture deficit levels and identifying water use differences within and between paddocks.

“Using data from both NASA and ESA satellites and on-ground weather stations, IrriSAT can be a very useful tool to calculate crop coefficients and forecast crop water use, as well as irrigation scheduling and benchmarking,” he said.

The IrriSAT app has seen rapid uptake, with irrigator’s right across Australia using the technology. Commercial companies such as Goanna Telemetry have also been incorporating the technology into their services and products for farmers. 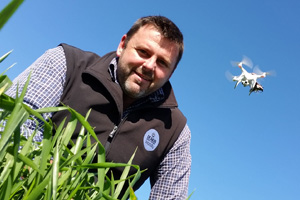 “One of the major advantages of using a low-cost drone platform is the ability to take images when you want.”

Shining the spotlight on sustainability

A Deakin University researcher's advocacy for sustainable agriculture and climate change action has led to an award for environmental leadership.

Turning water from foe to friend

As one in 100 year floods become more like one in ten, or one in five year events, blue-green infrastructure could help reduce the impact of flooding on our environment and economy.

Citizen scientists are tracking the effect of environmental flows from a decommissioned reservoir near Victoria's Great Ocean Road, under the guidance of researchers from Deakin and Barwon Water.