World Health Organisation (WHO) statistics on malaria estimated 212 million new infections, and 429,000 fatalities in 2015.
Early malaria diagnosis and treatment can save lives, and an approach discovered by Professor Tania de Koning-Ward’s team of researchers, from Deakin's Centre for Molecular and Medical Research, has reached a milestone, pinpointing a new way to kill the malarial parasite.

Cases of parasite resistance to artemisinin – the core compound in recommended combination medications for malaria – are becoming more widespread, signalling dire concerns for the effectiveness of current treatments.

The sense of urgency, and gravity of the health-related consequences, have been driving researchers to find an alternative to current treatment options.

"Malaria parasites live inside the host’s red blood cells. They produce a group of proteins to change the permeability of the red blood cell, making it more porous, so they can absorb from the plasma the vital nutrients they need to survive and replicate, as well as remove toxic waste products," she said.

"What we've shown is that if you genetically block one of these parasite proteins, you can effectively starve the parasite when it is in the blood, so it dies.”

The Deakin-led research was completed with support from the Burnet Institute and Monash Institute of Pharmacological Sciences.

Professor de Koning-Ward has been researching malaria for almost 20 years. She received a Commonwealth Health Minister’s Prize for Excellence in Health and Medical Research in 2011.

The research findings were recently published in eLife, with a paper titled: ”Plasmodium parasites deploy RhopH2 into the host erythrocyte to obtain nutrients, grow and replicate”.

The work was published alongside two other papers from research groups in the UK and USA, who used different approaches to also show that RhopH2, and another protein it interacts with called RhopH3, are critical for red blood cell permeability.

"The fact that two other research groups have independently come to the same conclusion is a real strength and means that we can now get on with designing drugs to block these pathways,” said lead author and research fellow at Deakin's School of Medicine, Dr Natalie Counihan.

The team’s next focus will be to determine how exactly the RhopH2 protein interacts with other proteins (both parasite and host red blood cell) to alter the permeability of red blood cells. That information will guide the best approaches that could be used to block the parasite from altering the red blood cell permeability, effectively starving the malaria parasite, providing insight to medical chemists for future development and optimisation of medications. This process would involve human trials.

With no current prevention for malaria, research is also under way on the development of vaccines. A notable advance was recently made in a Queensland study, although availability of vaccines is still likely be to at least five to 10 years away.

“It is because of the absence of an effective vaccine to prevent infections that we have to rely so heavily on drugs to treat the infection. That is why we are looking at new drug targets to treat malaria,” said Professor de Koning-Ward.

“In the meantime, it will be possible to test whether existing drugs that are used for other diseases can be repurposed for treatment of malaria, to block the parasite from altering the permeability. If there are drugs that are already available, then the timeframe is much shorter, especially if they are already licensed for use in humans,” she said. 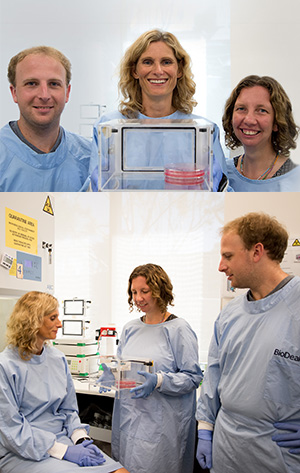 "The fact that two other research groups have independently come to the same conclusion is a real strength and means that we can now get on with designing drugs to block these pathways."