In a world first, a Deakin / CSIRO research team has achieved one of the first critical steps towards developing allergy-free eggs. The breakthrough could lead to the production of allergy-free eggs within as little as five years.

They have also collaborated closely with Professor Mimi Tang, a paediatrician from the Murdoch Children’s Research Institute and Royal Children’s Hospital, who will undertake more clinical studies.

The researchers were able to “switch off” the allergenic effect of the protein ovomucoid (an enzyme inhibitor) that causes most egg allergic reactions, as it survives the heating/cooking process.

The team has also created more standardised synthetic versions of the four proteins, which will improve the effectiveness of skin prick testing and immunotherapy, for desensitising people with egg allergies.

Associate Professor Suphioglu, from Deakin’s School of Life and Environmental Sciences, explained that allergy-free eggs would not only make life easier and safer for people with egg allergies, but they would also improve the safety of medications made with eggs, such as flu vaccines.

“Egg allergies are one of the most prevalent allergies in children, with almost nine per cent of Victorian infants having an egg allergy at 12 months of age and nearly half a million Australian adults affected,” he said.

“Egg allergies are the second most common in Australia, after dairy, but more common than peanut allergies. Reactions can include dermatitis, asthma, vomiting or gut irritation, or anaphylaxis.”

“The next step, together with Professor Tang, will be to measure in the lab how the modified protein ovomucoid interacts with a patient’s immune system by assessing how it effects T cells,” he explained.

“We have turned the protein into a non-allergen or hypoallergen. Now, we need to see if it stimulates an immune response that will allow us to build tolerance in allergy patients.”

His team will also attempt to “switch off” the other three proteins, systematically, so they can remove almost all causes of egg allergy.

“The modification in the protein results in a very subtle change of shape - caused by replacing some amino acids,” noted Prof Suphioglu.

“It is interesting that different versions of the protein already exist, in eggs from different birds, for instance, so some people may be able to safely eat emu, duck or quail eggs, but not chicken eggs.”

“Removing the chance of allergic reactions from eggs is potentially life-saving. It would allow people to gain nutritional benefits, reduce the risk of accidental exposure, and allow for safer flu vaccinations.” 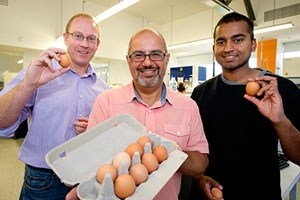