Stepping into space: what are our ethical obligations?

Space exploration is a fascinating frontier for science, but we need to consider its ethical, health and environmental implications, claims Deakin bioethicist Evie Kendal.

Who owns objects in space? How do we protect the Earth from the biosecurity risks of space exploration and what are the ethics of establishing future colonies on other planets?

Deakin bioethicist Dr Evie Kendal is researching the emerging field of space ethics, particularly in relation to risk assessment and biosecurity. Her research is timely, given the Federal Government’s recent announcement of a $50 million commitment to establish Australia’s own space agency.

“Most people are unaware of the ethical issues that we need to consider in parallel with the technological developments concerning space,” said Dr Kendal.

“Although it might seem a long way off, determining whether it would be acceptable to terraform another planet to sustain human life or what kinds of commercialisation might be ethically or legally permissible in space are questions that need to be considered.”

With a background in public health, bioethics and feminist literary criticism, Dr Kendal brings a multidisciplinary perspective to her research, which centres on the ethics of emerging technologies, including space ethics and reproductive biotechnologies, such as artificial wombs. She has a PhD in Bioethics and Science Fiction and two master’s degrees (Bioethics, and Public Health and Tropical Medicine).

“While it will be some time before we have human colonies in space, there is an opportunity to draw boundaries in advance to prevent damage to space environments and over-militarisation,” she noted.

“Frameworks are also needed to enable the benefits of space exploration to be shared equitably across the global population and to ensure human safety remains a priority.

“Promoting the health and safety of astronauts and people working in space-related industries, while also protecting the Earth from potential biosecurity and military threats, is really important. On the positive side, most space-related research is translated into beneficial scientific developments on Earth, many of which are in the area of advanced medical technology.”

Dr Kendal joined Deakin’s School of Medicine in January as a lecturer in Bioethics and Health Humanities. She is the Deputy Theme Leader of Ethics, Law and Professionalism in Deakin’s medical program and runs the new “Ethical, Legal and Social Implications of Emerging Technology” (ELSIET) research group, funded by Deakin’s Science and Society Network (SSN). She is also currently designing a space ethics MOOC, in collaboration with several space research centres and, since 2015, has conducted bioethics seminars at Yale University’s Interdisciplinary Centre for Bioethics on topics such as “gaining consent for experiments involving celestial objects,” with the aim of highlighting the risks of unregulated space exploration.

She is also currently working with colleagues to develop ethical guidelines for space exploration and aerospace medicine, with the ultimate goal of establishing a global governing system that includes the UN.

“Australia has a lot of expertise and the potential to contribute more to the global space effort. Although space ethics is a very small field, with only a few international experts working in this area, I hope it grows as Australia’s commitment to space research does,” she said.

A personal drawcard for her work is being able to tie speculations, such as those to do with time travel, to real-world ethical challenges.

“One of the best things about being an emerging technology ethicist is that you’re not limited by what is technically possible. You need to consider the ethical implications of developments if they do become possible,” she said.

“Human exploration on Earth in the past has often been destructive and exploitative, especially in terms of colonisation and displacement of Indigenous communities. An appreciation of space carries with it an appreciation of the fragility of life and our biosphere.

“Space ethics is not about what we can do now, or even what we might be able to do in the future. Rather, it’s about what we should or should not do and why.”

Dr Kendal has written a chapter on the need for ethical guidelines on space in an upcoming book (published 2019): “Planetary Defence: Global Collaboration for Defending Earth from Asteroids and Comets,” edited by Nikola Schmidt. 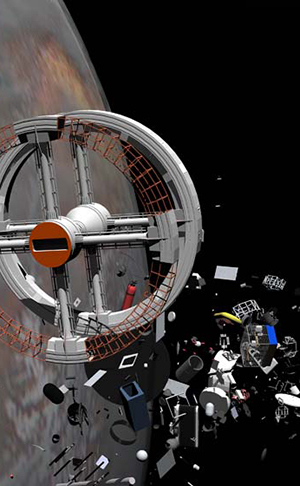 The new facility for the Geelong Centre for Emerging Infectious Diseases has been officially launched.

A GCEID team has discovered coronaviruses in Australia's wild birds, showing the nation is not as isolated from potentially serious host-jumping virus outbreaks as previously thought.