The coal seam gas (csg) industry is booming in Australia. Since the start of the 21st century, the industry has increased dramatically and, given the significant reserves predicted to exist in the Eastern states, this expansion is likely to continue as demands in the domestic and export market increase. It is estimated that the export value of the LNG (Liquid Natural Gas) Industry has increased more than fourfold in Australia over the last decade and is now worth nearly $11 billion. In light of this, one of the most significant issues facing Australia today, is the development of a responsive and balanced regulatory framework, capable of properly evaluating the myriad economic, environmental and social issues that underpin this progression.


Coal seam gas is a non-renewable energy resource that is a by-product of coal. It is a ‘pure’ and ‘non-toxic’ gas and for this reason has attracted a lot of commercial interest. During the process of coal formation, biogenic and thermogenic methane gas forms. Much of this methane remains trapped in the microspores of the coal in areas known as coal ‘seams’ or ‘cleats.’

Historically, csg was ventilated out of a coalmine as it was the cause of most mining explosions. However, following increased global awareness of csg as a viable energy resource in its own right as well as the development of more efficient technology for its extraction, the commercial utility of csg has rapidly expanded.


Coal seam gas mining involves the removal of vast amounts of water. It can also involve the injection of chemical additives into this water. This extraction process generates three major environmental concerns which have associated industry and community impacts.

First, the removal of large amounts of groundwater can significantly affect aquifer levels and in some cases, deplete them completely. The reduced availability of groundwater can significantly affect agricultural and rural industries reliant upon this water supply. This is a particular concern for agricultural industries within New South Wales and Queensland, where the majority of coal seam gas mining is concentrated.

Second, unlike ordinary water, ‘associated water’ has a high saline content and may, during the csg process, have had further chemical constituents added to it. In light of this, it is vital that the disposal of ‘associated water’ be properly dealt with. The danger of releasing polluted water into adjoining waterways and contaminating domestic water supplies is a major concern. Research from the United States has established that the release of ‘associated water’ into the surrounding landscape can have a devastating impact.

Third, the increasing prevalence of hydro fracturing as an enhanced method of extraction during csg mining has the potential to cause significant environmental damage. Hydro fracturing is the artificial stimulation of coal seams and involves injecting a combination of water, sand and chemicals into the seam. Hydro fracturing, utilized in some csg projects currently operational in Australia, is known to increase the flow of csg gas and therefore provide enhanced commercial benefits. This process can, however, radically deteriorate groundwater aquifers and is also the primary cause of chemical pollutants within associated water.


These environmental concerns have the potential to significantly affect the Australian landscape and, have not gone unheeded in the emergent regulatory framework. The draft code of conduct for csg mining, introduced by the New South Wales government in March this year, following on from the decision by that State to enter the National Partnership Agreement on Coal Seam gas (NPACSG), explicitly mandates the evaluation of the impact of groundwater aquifers which will be effected by specific csg mining applications.

Further, the new independent scientific committee formed pursuant to the NPACSG has the power, at the request of the relevant Commonwealth or state authority, to undertake expert scientific research to examine the impact of csg mining on significant water resources. This committee also has the power to commission regional water assessments in high priority areas affected by csg mining.

The EPBC will, however, only apply where it can be established that the application has or will have a significant impact upon a matter of national environmental significant which include world heritage properties, national heritage places, wetlands of international significance, nationally listed species and ecological communities, nationally listed migratory species, nuclear actions, and the Commonwealth marine environment but not the protection of groundwater reserves.


Balancing the importance of environmental protection and the need to mandate sustainable land practices with the economic benefits of a lucrative resource industry is a fragile and complicated process. It can only be achieved, if at all, with a full arsenal of state and regulatory controls, the backing of strong and independent research committees and the initiation of proper stewardship.

The regulatory developments that have been introduced in Queensland and New South Wales to date attempt to promote informed decision-making. Appropriate authorities are required to be fully and accurately appraised of all relevant research and statistics concerning the predicted effects of csg mining, prior to any approval being granted. These shifts in regulatory perspective are vital if the possibility of long-term and irreversible damage to the landscape, to ground water aquifers, to adjoining waterways and also to rural and agricultural industries is to be avoided. These are cogent community concerns as recent protests in Sydney and Queensland have demonstrated and must not go unheeded.

Any dilution in the evaluation process will undermine ecological integrity and cause, as recently outlined by the Ruckelshaus Institute on Environment and Natural Resources, in its report on water production from Coalbed Methane, ‘the depletion of vital natural resources causing future economic destruction.’ The regulation of coal seam gas in Australia must focus upon sustainable development – a paradigm that extends beyond immediate economic goals towards long-term viability and the optimal usage of both renewable and non-renewable resources. 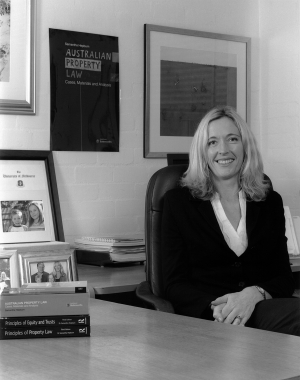 Balancing the importance of environmental protection and the need to mandate sustainable land practices with the economic benefits of a lucrative resource industry is a fragile and complicated process, says Associate Professor Samantha Hepburn.