In Australia, it’s estimated to affect more than 447,000 people.

Almost 1.5 million people are involved in the care of people living with dementia in Australia and the cost to our economy in 2019 is estimated to be more than A$15 billion.

“We have been working with Dementia Australia to improve the quality of life of people living with dementia by increasing the understanding of those who care for them,” says Mouzakis.

“Dementia Australia originally came to us with a problem. They knew that people with dementia could be supported to stay at home longer if a few adjustments were made to accommodate their symptoms.

“They had a website about how to create a dementia-friendly home, but it had a lot of information and not enough practical examples. We took the information from that website and created The Dementia-Friendly Home app.

“The app is an interactive experience that allows you to move through the rooms of a typical home and immediately see the elements that need to be changed to transform the house into a better place for a person with dementia.

“In the kitchen, you can look at the stove, cupboards or floor and see hotspots and make simple changes such as adding labels and pictures to cupboards or changing solid cabinet doors to glass.

“The aim was to make it possible for people with dementia to stay in their own homes for as long as possible,” says Mouzakis.

Following the success of this application, Dementia Australia asked A²I² to explore how technology could be used to train carers in aged care facilities.

The aged care sector has expanded dramatically in recent years and one of the biggest issues is training people who care for the elderly.

“Dementia Australia and A²I² came up with EDIE (Educational Dementia Immersive Experience), a virtual reality application that puts the user in the shoes of a person living with dementia,” says Professor Mouzakis.

“EDIE aims to build empathy and raise awareness of the issues faced by those living with dementia by helping the user understand why someone with dementia might behave the way they do in certain situations.

“The view of EDIE’s world came from people living in the early stages of dementia who were able to articulate what they were seeing and feeling. For example, when they looked at carpets with patterns they saw bugs moving across the floor.”

When the user puts on the VR goggles they step into the shoes of EDIE, a person with dementia, as he navigates to the bathroom during the night, trying his best to avoid disrupting his partner.

The curtains aren’t drawn, there is a storm outside, and shadows appear in the room.

Initially, EDIE forgets which door is the bathroom door and goes into the wardrobe. When he manages to find the bathroom, he won’t go in because he thinks there is a hole where the mat is.

Using various lighting, sound, and other special effects, the application highlights how dementia can complicate a person’s perception. A second scenario demonstrates the simple changes that can be made to improve EDIE’s quality of life.

EDIE has proved to be a cost-effective way to educate large numbers of people and has been picked up by dementia organisations in Canada, Singapore and the Czech Republic, and translated into Czech.

“At A²I² we have a unique group of individuals, including software engineers and games developers, and access to facilities such as the Deakin Motion Capture Lab, that allow us to create world-class applications from the initial concept through to the final product,” says Mouzakis.

“Our aim is to use technology to give our community something of value that will have a positive impact on their lives.”

This story was originally published in dKin Magazine. 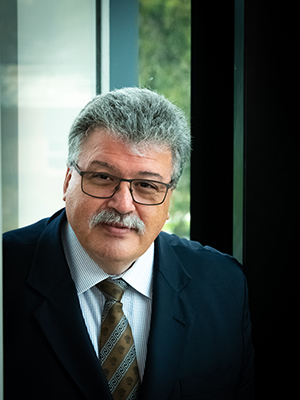 “EDIE aims to build empathy and raise awareness of the issues faced by those living with dementia by helping the user understand why someone with dementia might behave the way they do in certain situations."

Whether it's criminal activity against individual businesses, or the work of a 'state actor' hacking into Federal Parliament's servers, recent cyber attacks highlight the need to build Australia's expertise in cyber security.