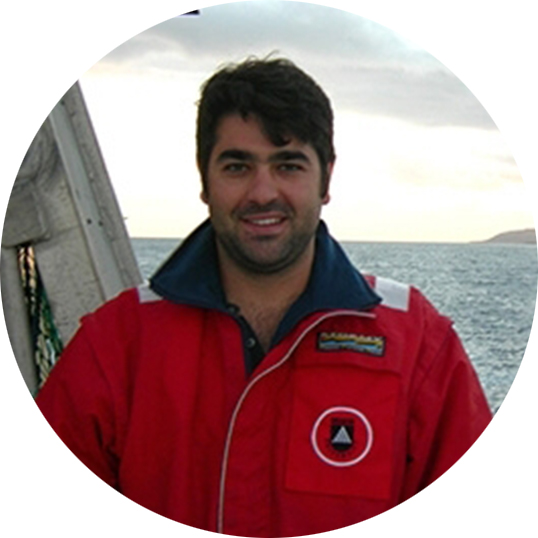 From above and below the waves, Associate Professor Daniel Ierodiaconou is working to understand the impact we are having on our marine environment.

Mapping the future for Victoria’s oceans

Working to map and monitor a Victorian coastline experiencing global warming at four times the global average to the east, the work of marine scientist Associate Professor Daniel Ierodiaconou and his team has immediate implications for the management of marine resources.

Yet it’s in the decades and even centuries to come that the data and observations being gleaned now may be of far greater relevance. 'I tell my team what we do now is important and has been recognised as such by both State and Federal government agencies, from environment to defence,' Assoc. Prof. Ierodiaconou says.

'But it’s in 20, 50, 100 years’ time, when future generations are using our data to understand the impact we humans are having on our oceans, when they will be treasured.'

As the Principal Scientist for the Victorian Marine Habitat Mapping Program and node leader of a multi-institution team for the newly established Victorian Integrated Marine Observing System (VIC-IMOS), Assoc. Prof. Ierodiaconou is realising a childhood dream.

'I have always been fascinated by the ocean. I did my first Pier to Pub swim at age 10 and received my scuba license at 14,' he says. 'I was then, and still am, blown away by the marine life we have in temperate waters; kelp forests and stunning sponge gardens that, in terms of beauty and complexity, rival what people see at the Great Barrier Reef.'

He is also driven by critical concern for the future of the oceans off Victoria’s southern coastline. 'I have a sense of uneasiness for the world my three daughters will live in. Will they see similar oceans and benefit like we do now from the wealth of ecosystem services they provide?'

Based in Warrnambool and educated at Deakin (Bachelor of Science – Fisheries Management and Aquaculture; Bachelor of Science – Aquatic Science; Doctor of Philosophy), Assoc. Prof. Ierodiaconou also leads the Deakin Marine Mapping Group and the Victorian Coastal Monitoring Program and is a recent co-recipient of the Eureka Prize (for innovation in citizen science) for the latter. He is also on the board of directors for the recently established Great Ocean Road Marine and Coastal Parks Authority.

'I want to understand the physical and biological processes that influence biogeographic patterns in marine ecosystems at both ecological and geological timescales, Assoc. Prof. Ierodiaconou says.

'To do this we use a lot of specialist tech, such as seafloor mapping systems on Deakin’s Research vessel MV Yolla, capable of building 3D maps of our seafloor. It’s like Google Maps, but of the sea.

'Some of the areas we work are hundreds of metres deep – way too deep for divers – so we deploy remote camera systems to document biodiversity values. It provides a lens into a mostly unknown world.

'My lab specialises in bringing this data together using machine learning and a range of techniques to predict species distribution and the impacts of human activities, as well as inform things like marine park management. We also collect important baselines in unexplored areas of our oceans.'

A window to ancient coastlines

His greatest passion is seabed mapping. 'There’s nothing more thrilling than seeing the livestream maps of the ocean, where you know no one has looked since Flinders circumnavigated Australia,' he says. 'I see amazing things from ancient coastlines from lower sea-level stands, extensions of our river systems, lava flows and volcanic cones. Areas that would have been used by our traditional owners at lower sea-level stands and hold important cultural significance to this day.'

The results of his work provide a comprehensive picture of life and the diversity of marine habitats along the Victorian coast, which will inform current and future coastal management strategies, fisheries management and efforts to combat the effects of climate change.

His findings also reveal cause for optimism, and validation that long-term behavioural change is possible. 'I see good, protected areas, some thriving marine parks, that are showing recovery of some important species and potential flow-on benefits outside their boundaries,' he says.

'I also see commercial fishers becoming spatially aware and using new approaches to sustainably harvest their stock and, most importantly, protect the habitat that allows it to be there.'