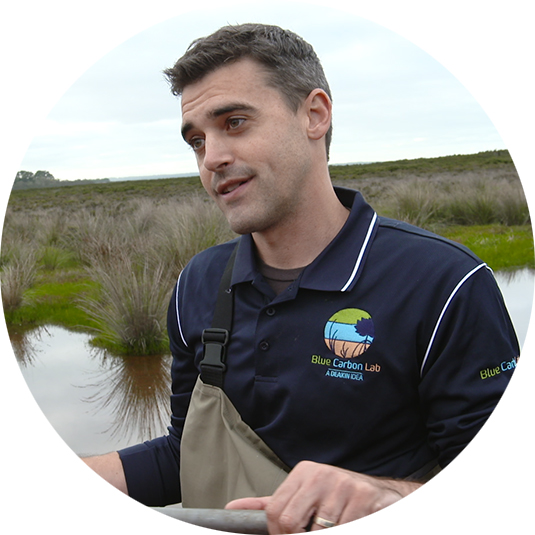 Holding the key to a ‘secret weapon’ against climate change

Professor Peter Macreadie describes the work of Blue Carbon Lab, a Deakin University initiative he founded and leads, as holding the key to 'a secret weapon to reset the planet’s thermostat.'

It’s a grand statement but at the heart of his hypothesis is an essential truth: the ecosystems found in coastal shorelines and wetlands – such as seagrass meadows, salt or tidal marshes, and mangroves – are nature’s carbon super-suckers. Occupying less than 1 per cent of the sea floor, they sequester half of the carbon dioxide that is captured and stored by the oceans (or ‘blue carbon’). And, unlike trees which release their sequestered carbon back into the atmosphere when they die, the coastal ecosystems can store carbon for up to thousands of years.

'They might be small in area, but they're really packing a big punch when it comes to climate change,' Prof. Macreadie says.

Alarmingly, these ecosystems are being lost at the rate of 1 to 3 per cent, per year in Australia – due, somewhat ironically, to the very force they are being bolstered to oppose: climate change. 'That's equivalent to an extra 10 million cars on the road in terms of emitted carbon when we degrade them, so they're really important,' he says.

The battle to save 'the armpits of the coast'

If trees are romanticised as the 'lungs of the earth' and the job of marine biologists frequently associated with saving colourful coral and interesting marine fauna, Prof. Macreadie asserts that the shorelines, estuaries and riverine swamps he watches over are 'the armpits of the coast'.

It’s a cheerfully frank admission that the job of wading through thick, smelly mud to monitor the performance of these areas is perhaps not the most glamorous calling, but one he is proud to claim for the impact he and his team can have on the battle to reverse climate change.

From an early age, Prof. Macreadie saw the ocean as 'a magical place'. Marine biology was the career he coveted, but instead he graduated from University of Melbourne with a Bachelor of Science in Biochemistry and Molecular Biology, initially following his father’s footsteps to work at CSIRO on drugs to treat malaria and Alzheimer’s Disease.

A shock diagnosis and a new potential weapon

A shock diagnosis of a life-threatening cancer in his early 20s changed everything, and during his six-month treatment and convalescence he had time to reflect on his childhood passion, resolving to return to marine science. Obtaining his PhD in marine ecology from University of Melbourne, he chanced across the term ‘blue carbon’ in a report in 2009.

'I thought even if this is just half right, this is a really big deal. This was a new potential weapon in the fight against climate change,' Prof. Macreadie says.

After working as a Research Fellow in Marine Ecology at University of North Carolina (USA) and University of Technology Sydney, Prof. Macreadie joined Deakin University in 2016 to found Blue Carbon Lab, concurrently progressing from Associate Professor in Environmental Science to his current role, Professor of Marine Science.

Getting the world involved

Although the degradation or destruction of coastal ecosystems remains one of the greatest challenges facing the Blue Carbon Lab team, Prof. Macreadie says another key goal is to engage the wider world in their largely unheralded work.

'Through research, my team and I are delivering practical information on the scale of the opportunity for blue carbon drawdown, where to act and how to act. By being on-the-ground and in the action, restoring and protecting coastal wetlands, I’m breaking down barriers to investment in blue carbon,' he says.

One initiative sees a three-way partnership between Blue Carbon Lab, Earthwatch and investment bank HSBC, the latter having pledged $150 million to support water programs as part of its global sustainability strategy. HSBC executives are encouraged to pull on a pair of gumboots and join Prof. Macreadie’s team as they rove shorelines and swamps, helping to collect the data needed to demonstrate the continuing value of these ecosystems.

There are many further opportunities for corporations and businesses to get involved and engage with the research, he says, and also for marine-based industries and even primary land users to invest in carbon offsetting in the local area on which they may be having an impact.

His team is also working with landowners to rehabilitate wetlands through measures including altered grazing practices, planting vegetation and controlling pests. Ultimately, Prof. Macreadie would like to persuade coastal farmers to trade in their herds or crops to cultivate blue carbon, with funding from offset programs.

'Admittedly when I started in research, I was keen to explore and faff about in oceans getting paid to do it. Now, with all the work we’re doing at Blue Carbon Lab, it feels more like a calling.'