Animals have long been entangled with global cultural politics of nation-building and nationalism. In North America, both cattle and horses, as domesticated laboring animals, have been foundationally deployed as tools of colonialism, the settler-colonial project (Anderson 2006). Cultural narratives rescript ideas of the North American ‘West’ through animals’ use in dispossessing indigenous peoples from their land and native animal species from their habitats (Anderson 2006; Fischer 2017), and through the contemporary dairy and beef industries (where cattle and the consumption of their bodies and reproductive outputs are drawn into narratives of US patriotism and what it means to be American) (Gillespie forthcoming; Orzechowski 2012; Sharpes 2006).

India exemplifies the animal-nationalism collapse to an extent where the Mother Cow is Mother India – specifically a Hindu Mother India. The prohibition of cow slaughter and criminalization of beef in India advances the narrative of the ‘beef-consuming’ ‘cow-butchering Muslim’, obscuring the role of milk, valued as sacred by Hindus, in cow slaughter (Narayanan 2017). In a similar vein, Buddhist nationalists demand an end to cow slaughter in Sri Lanka to marginalize Muslims, even as the state increases its investment in the dairy sector. In both India and Trump’s America, the resurgence of right-wing nationalism asserts the ‘whiteness’ of milk as a sign of white racial superiority for neo-Nazis (Freeman 2017), and the pre-eminence of upper-caste Hindu extremism respectively. In the Netherlands, genetic modifications of bovine animals bring up questions of Dutch national identities, a cultural preoccupation with ‘purity,’ and a historical contextualization within the Nazi occupation (Taussig 2004).

Cultural and religious uses of the lives and deaths of animals are also profound in nation-making. Worldwide, domesticated animals feature in nation-building narratives via masculinist performances of settler colonialism and animal dominance. Such culturally infused practices include the rodeo in America, horse-racing in England and the former British colonies, bull-fighting in Spain and Colombia, buffalo-racing in India, and rooster and dog-fighting in many parts of the world. Nationalist narratives of control and eviction of animals, operate alongside religio-political and cultural discourses that celebrate and even deify them. Monkeys and rats are simultaneously pests in India, and worshipped as divinity. In Australia, the native kangaroo is a pest but also on the Coat of Arms. The ritual worship and sacrifice of animals across religions is intertwined with religious, cultural, and nationalist identities.

This symposium has two mandates. One, we ask why and how animals are foundational to cultures of nationalism and racial demarcation. Postcolonial critical animal studies scholars have drawn attention to the ways in which racialization (as a process frequently foundational to projects of nation-building) is intimately entangled with what Maneesha Deckha calls a kind of “species thinking” wherein categories of human, subhuman, and nonhuman operate to create a violatable Other (Deckha 2010; Kim 2015). We are interested in how animals themselves are used to reproduce and sustain animality and its role in nationalistic practices of exclusion, violence, and supremacy.

Two, we aim to re-imagine how animals may feature in more ‘inclusive nationalisms’ or ‘just nationalisms’ that attend to difference within and across species. Variations of environmentalism and eco-citizenship are interwoven with nation-building narratives, and are beginning to variously unsettle and reframe the nation-state (Yeh 2009). The Constitution of India directs its citizens to ‘have compassion for living creatures’ since its inception in 1950. In 2015, New Zealand recognized animals as ‘sentient’ beings. However, such mandates are yet to manifest meaningfully worldwide, in ways that protects animals from human exploitation and there remains a question of whether legal reforms can even substantially represent the interests of nonhuman animals when law itself is an anthropocentric institution (Deckha 2013).

Dogwhistling: Australian Racism and Animal hate
Dog Whistling is an Australian colloquial term for political speech that carries coded messages – most commonly used to describe a form of racist speech that contains ‘plausible deniability’, subtext that can be denied: I didn’t mean that, I was talking about this (see Fear 2007).  It is speech with a forked tongue and locates its cut, its doublespeak along the faultline of the human/animal, disowning and disavowing the ‘bad’ speech to the realm of the animal Other.  That is, it makes racism the home of the dog. The racist is the dog, and the dog is the subhuman racist who laps it up. My concern today is with the dog, and how and why the dog and the dingo (the focus of my talk) is so tangled up in racism.  I want to highlight how animal studies research in Australia requires a good ear for dog-whistling, something which colonial states like Australia, with our haunted landscapes and disawowed histories become adept at producing and also avoiding. 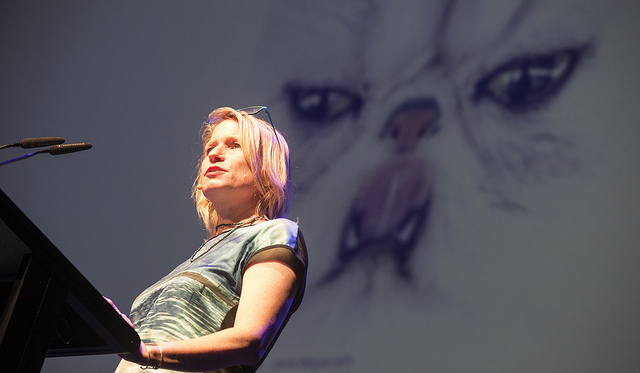 Fiona Probyn-Rapsey is Professor in the School of Humanities and Social Inquiry at the University of Wollongong, Australia. Fiona’s research connects feminist critical race studies and Animal studies (also known as human-animal studies), examining where, when and how gender, race and species intersect. She is the author of Made to Matter: White Fathers, Stolen Generations (2013), and co-editor of 3 books, Animal Death (2013) and also Animals in the Anthropocene: Critical Perspectives on Non-human futures (2015) and Animaladies; Gender, Species, Madness (Bloomsbury forthcoming 2018) with Lori Gruen. Fiona is also Series Editor (with Melissa Boyde) of the Animal Publics book series through Sydney University Press.

Abstract submissions have now closed, but registrations are open on Eventbrite.

Please contact Yamini Narayanan if you have any questions.

Deckha, Maneesha. 2013. “Initiating a non-anthropocentric jurisprudence: The rule of law and animal vulnerability under a property paradigm.” Alberta Law Review, 50(4): 783-814.

Fischer, John Ryan. 2017. Cattle Colonialism: An Environmental History of the Conquest of California and Hawai’i. University of North Carolina Press.

Orzechowski, Karol. 2012. Under What Flag? Identity and Nationalism in Canadian Rodeo, ProQuest Dissertations and Theses.

Wynter, Sylvia. 2003. "Unsettling the coloniality of being/power/truth/freedom: Towards the human, after Man, its overrepresentation--an argument." CR: The New Centennial Review, 3(3): 257-337.

Register now for this event.