Deakin University and Dreamscreen Australia have signed a landmark partnership agreement that is set to significantly strengthen the nation’s film and entertainment sector.

The university has purchased 683 ROE Black Pearl LED panels and associated equipment for $3m in readiness for a new ‘state-of-the-art’ virtual film production studio in Geelong.

Under the agreement, Dreamscreen, a world-class film production company based in Melbourne, will have exclusive access to the panels for television and film projects.

Deakin University Vice-Chancellor Professor Iain Martin said the agreement was a “significant gain for Deakin” that strengthened the university’s capabilities at the interface of digital technology and creative industries.

"It will enable our students to be exposed to some of the most exciting film production technologies globally and cement Deakin's standing as a digital leader," Professor Martin said.

"Filming inside a studio mitigates problems with weather and has less environmental impact than filming on location.

"Deakin's investment and the partnership with Dreamscreen means we have ‘led the market’ in taking the initiative to build a world-class production studio that will be the envy of universities globally."

Executive Dean of the Faculty of Arts and Education Professor Vanessa Lemm said students were “front of mind” in Deakin’s negotiations with Dreamscreen.

The partnership includes 25 industry placements worth a total of 2500 hours annually for Deakin film, animation and design students to work on Dreamscreen projects. This will give Deakin's School of Communication and Creative Arts students a unique opportunity to get hands on experience while working side-by-side with industry professionals.

"At Deakin, we make it a priority to prepare our students for the workforce by equipping them with the skills they need to succeed in their chosen careers," Professor Lemm said.

"Not only will our film and animation students get to work with the best, cutting-edge virtual production technology, but they will also get to learn from industry professionals who are at the top of their game in what they do."

Head of School for the School of Communications and Creative Arts Professor Matthew Delbridge said the LED panels will form a huge 26m x 6m wall once assembled.

This would make it the biggest university-owned virtual production studio in Australia.

He anticipated the studio would be ready for the start of trimester one in March next year, with a teaching and research facility to be based at Deakin’s Burwood campus while the Geelong site is being prepared.

"Virtual production is the inevitable culmination of film production and gaming technology. As gaming engines and film techniques continue to evolve and collide, real time photoreal virtual production offers storytellers and content creators the chance to dream larger than ever before without breaking producer’s budgets," Mr Jacobson said. 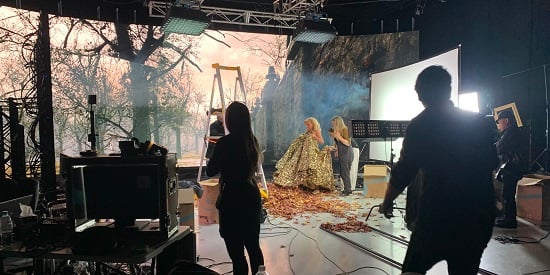