Each year Deakin's Alumni Awards recognise, acknowledge and promote prominent alumni around the world who have achieved outstanding success in their communities, professions or given exceptional service to the University.

We are delighted to invite you to nominate a Deakin graduate or to self-nominate for the 2022 Deakin Alumni Awards. The 2021 Alumni Award nominations have now closed.

The two alumni award categories are:

How to make a nomination

Nominations are via a submission of up to 500 words outlining how the nominee demonstrates the Deakin values in their professional and personal lives – you may highlight one or more of these values in your nomination.

Please note that the nominations are confidential and only the award winners and their nominators will be contacted by the Deakin Advancement Office. When nominating someone else, we ask that the nominees are not approached for information or advised of the nomination at any stage. Immediate family members cannot act as supporting referees in the nominations.*

Final selection of the Alumni Award winners will be made by the Vice-Chancellor in conjunction with the Chief Advancement Officer. The Awards will be presented in October 2022 and the winners will be contacted beforehand.

Unfortunately, you are not eligible to be nominated if you are a:

Please submit your nomination to Deakin University Advancement by Friday 6 May, 2022.

Young Alumni of the Year Award
Master of Business Administration (International), 2014
Faculty of Business and Law

Aamir Qutub is the CEO and Founder of Geelong-based company Enterprise Monkey, a multi-national digital organisation. Aamir is also an investor and co-founder of eight other startups in Australia. In 2017 he was appointed as a member of the Geelong Authority by the Minister of Planning.

Aamir has also helped develop the Entrepreneurs Geelong Network - a group of around 200 entrepreneurs and was the founding Secretary of Pivot Summit - Australia's largest regional tech conference.

Aamir’s empathy and desire to help others throughout the recent COVID-19 lockdowns and bushfire crisis inspired him to create Angel Next Door - an online platform that empowers people to assist others in their local community, providing groceries, medicine, or emotional support.

Young Alumni of the Year Award
Bachelor of Arts/Bachelor of Commerce, 2016
Faculty of Arts and Education

Vollie projects are exclusively online, meaning that people can donate their time, skills, and experience from anywhere in the world, and around their busy personal and professional schedules. Vollie is unlocking millions of dollars in volunteer value to not-for-profit’s and allowing a new generation to make a change - their way.

When Vollie was in its early stages, they participated in SPARK Deakin’s Accelerator program, where they received mentorship and funding to help them get started. Tanya is now giving back to this program by volunteering as a mentor for a new generation of start-up founders, sharing her learning and knowledge.

Alumni of the Year Award
Bachelor of Engineering (Manufacturing), 1998; Doctor of Philosophy, 2002
Faculty of Science, Engineering and Built Environment

Dr Matthew Dingle worked as a Lead Engineer at Ford’s Product Development Facility in Geelong during the 1990s and completed his PhD at Deakin University in collaboration with Ford Stamping Operations in 2001.

Matt is a leader of innovation in building technology. Through his business FormFlow, the team developed the C90 FormFlow Bend - a world-first invention enabling sharp bends to be created in corrugated iron. The bend technology revolutionises the design and construction industry by delivering smooth transitions between corrugated sheet sections at a range of angles. Matt and the FormFlow team have partnered with Deakin to develop affordable shelters for Homeless people and Disaster relief, collaborating with Deakin students and staff.

Dr Miriam-Rose Ungunmerr Baumann AM of the Ngan'gityemerri language group is an Aboriginal elder from Nauiyu and a renowned artist, activist, writer, and public speaker. Miriam-Rose was the Northern Territory's first fully qualified Indigenous teacher and has visited schools throughout the Top End to advocate for art to be taught as part of every child's education.

Among her many initiatives and achievements, she also established the Miriam-Rose Foundation, a not-for-profit organisation that empowers Indigenous youth through education, art, culture, and access to opportunity. Miriam-Rose has dedicated her life to creating bright and fulfilling futures for First Nations children, maintaining the cultural independence of her people. In 2021, Miriam-Rose was named Senior Australian of the Year.

Kate Palmer AM is one of Australia’s most experienced and highly regarded sports executives. Currently serving as CEO of OneAthletics, Kate has been a leading figure in netball and Australian sport and was the first woman to head Sport Australia as Chief Executive Officer.

Through her leadership, Kate has driven governance reform among national sports organisations and has implemented safeguards to protect children in sporting environments.

Over her ten years as Chief Executive Officer at Netball Australia, Kate maintained the game’s status as the highest participation sport for women and oversaw the introduction of its national league, Super Netball.

Alumni of the Year Award
Graduate Diploma of Development Studies, 2005
Faculty of Arts and Education

Louise Adams is a Chartered Civil Engineer and has over 20 years of experience managing and designing work for civil and multi-disciplinary land development projects, as well as technical advisory for project planning.

Louise first began work with Aurecon in 2000 as a graduate civil engineer and has worked her way up to become the first female Executive Director on Aurecon's Board. With a background in stormwater management, flood risk assessment and mitigation, Louise has undertaken work in the public and private sectors and has played a part in emergency relief efforts.

With her experience as a Chartered Civil Engineer, Louise has now stepped up as Aurecon's Group Chief Operations Officer and continues to passionately advocate for female leadership and equality within STEM. Louise was recognised as CEO of the Year in 2020 by CEO Magazine.

Alumni of the Year Award
Doctor of Philosophy, 2000
Faculty of Health

Dr Glenn Laverack is an international leader in health promotion and empowerment and has held a distinguished career as an academic and independent adviser for the United Nations, government, and development agencies for 35 years in over 50 countries.

Glenn has a wide range of professional publications, including 24 books published in several languages, such as Chinese, Arabic, and Italian. With his range of experience in cross-cultural settings, Glenn facilitates broad insights at both the practical and theoretical level. Glenn is committed to working with others to find solutions to the practical application of community-centred approaches.

Once again, we have worked on a collaborative design project with Deakin students at the School of Communication and Creative Arts to create our 2021 Deakin Alumni Awards trophy.

The inspiration behind this year's design

All our alumni are unique. Discover how the diverse journeys of all Deakin alumni shaped the design of this year’s trophy. 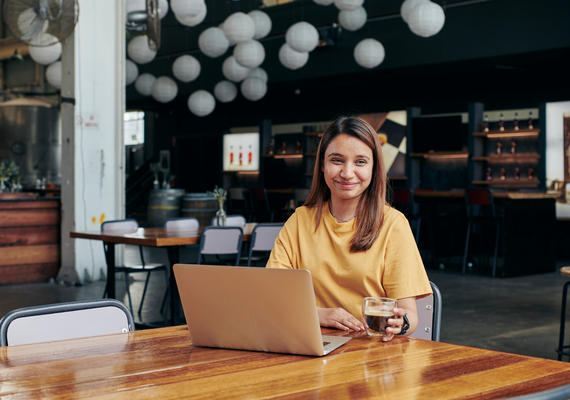 Explore more of our wonderful alumni award winners from previous years and be inspired by their stories.

Find out more about our past award winners

Stay in touch with us to hear about the latest alumni opportunities, Deakin news and research and much more. You can email the Alumni Engagement team or connect with us on Facebook or LinkedIn.