Victoria's dog-leash laws are failing, with non-compliance the norm for many parts of the state's coastline, according to a joint Deakin University and BirdLife Australia study of the state's beaches.

The study, to be published in a chapter from the upcoming book Impacts of Invasive Species on Coastal Environments, surveyed 69 beaches across the Victorian coastline from Mallacoota to Portland, finding non-compliance was putting endangered wildlife at risk.

They found that compliance varied between the different types of regulations, with the best compliance in no dog zones, which had 18 per cent observed non-compliance, and the worst in on leash at all times zones, where there was a whopping 79 per cent non-compliance rate.

Co-author Associate Professor Mike Weston, from Deakin's Centre for Integrative Ecology within the School of Life and Environmental Sciences, said many pet owners simply didn’t understand why it was a problem to have their dog off leash.

"Maybe they're just not aware of the damage that dogs can cause to the environment, or because people have close personal relationship with their dogs they want their dogs to have free exercise and they see that as harmless," he said.

"It doesn't help that it's often not clearly articulated why these restrictions are in place at some beaches.

"While these can be regulations to avoid conflicts with other beach users, it's also about protecting native wildlife, particularly over spring and summer when birds are breeding."

Associate Professor Weston said the most Victorian beaches were open to dogs, so it was important that where there were rules in place, they were followed.

"We need to change the way we think about how we have dogs on beaches," he said.

"People often say it's other dogs that kill wildlife, not theirs, or they think their dog is just having fun chasing birds. But even chasing has a very real effect on birds.

"They're trying to keep eggs warm and raise chicks, so being chased distracts them from being parents, and they can't take care of their young enough.

"Some people might just think about seagulls too, but we're also talking about wildlife that is quite rare and threatened, including plovers and terns, we've witnessed dogs harassing seals resting on beaches.”

Photographs gathered in the course of the research include images of dogs chasing birds, dogs crushing and eating nests, and young birds being killed by dogs.

"So we've been saying this is an issue for years, but maybe we really need to show people the damage being done," Associate Professor Weston said.

"There's a major compliance issue on our beaches that management authorities need to consider.

"Summer is a critical time for wildlife at the beach, and it coincides with a busy time for beach users. So that really becomes a big problem if dog owners don't follow the rules."

Associate Professor Weston said it was disappointing that rule breakers could ruin things for responsible dog owners too.

"Mornington Peninsula National Park was recently shut down to dogs completely because for decades they couldn't get compliance on dog rules," he said.

"And if we can't get these regulations working on other beaches then we may see even more no dog zones implemented.

"So the fraction of people complying with the rules are punished, which stinks."

Associate Professor Weston said he and his collaborators would continue to look at ways of improving compliance.

"More education, more awareness and better signage on beaches is needed, and part of that is getting serious about enforcing compliance too," he said.

"The good thing is that there is heaps of scope for improvement, so dog owners can be part of the change. We've got a long way to go, but it's an easy change for dog owners to make.

"Ultimately we want to see a sustainable use of beaches where dogs and wildlife can happily and peacefully co-exist." 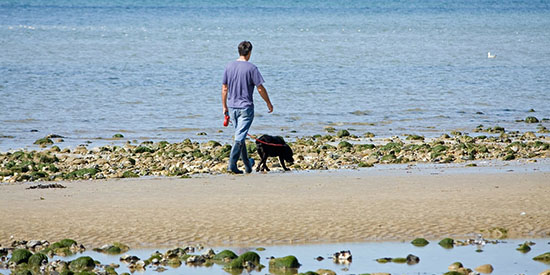