At the heart of Deakin University’s Future Economy Precinct, Carbon Nexus is supporting the transition to advanced manufacturing and smart system growth as the world’s most advanced carbon fibre and composite research facility.

As the only one of its kind in the world, Carbon Nexus is a best-of-breed facility delivering globally significant, university-based, industrial-scale research that is supporting the growth of a new smart-tech carbon fibre industry in Australia.

Carbon Nexus meets the needs of a wide range of industries looking to replace aluminium and steel in their products, including the aerospace, automotive, sporting goods, transportation and renewable energy industries.

With the world’s only industrial-scale carbon-fibre pilot production line on a university campus, Carbon Nexus is the world’s most advanced carbon fibre and composite research facility. The unique facility offers access to research and development services from precursor development to composite manufacturing delivered by a team of globally recognised, advanced materials experts.

Professor of Composite Materials Russell Varley is Carbon Nexus’ Research Leader, supporting cutting-edge researchers to solve the challenges of the manufacturing industry. Professor Varley and his colleagues are internationally recognised for their novel self-healing polymer that delivers a highly robust and reliable performance when added to the interior steels pips in oil field operations.

In the early 2000s, Australia was at risk of falling behind new manufacturing opportunities with industry demand for lightweight, low-cost and energy efficient carbon fibre and advanced composite production increasing rapidly.

With the closure of iconic factories and large-scale employers in manufacturing in Geelong, such as the Ford Australia plant and Alcoa’s Point Henry smelter, the region embraced a significant opportunity in 2006 to connect research and industry to retain and support people disrupted by Geelong’s changing industrial landscape.

Efforts then began to position Victoria in particular the Geelong region as the international hub for research in advanced fibre materials. The original project partners were Deakin University, Commonwealth Scientific and Industrial Research Organisation (CSIRO) and the Victorian Centre for Advanced Materials Manufacturing.

A global perspective lies at the heart of Carbon Nexus’ purpose, and the development of lightweight, low-cost and energy efficient carbon fibres is a high-value output that will contribute to the re-shaping of Australian manufacturing.

'The technologies that Carbon Nexus has created establish it as one of Australia’s most important research infrastructure investments, which is growing our research base, developing people and supporting emerging industries that will have a profound impact in the coming decade.'

Carbon Nexus looking to the future

Carbon Nexus research helped enable the creation of over 1000 jobs at the Waurn Ponds Future Economy precinct (including Carbon Nexus, Carbon Revolution, Quickstep and tenants at Manufutures), with more than 400 people being employed through this cluster of businesses and research facilities. Carbon Revolution’s employee numbers continue to grow, with 110 employees in 2014 expanding to 570 jobs in 2020.

With an future focus on the energy required to manufacture advanced lightweight materials, Carbon Nexus is engaged in research aimed at “greening” the carbon fibre manufacturing process, either by using less energy or incorporating renewable raw materials into the process.

More information on Carbon Nexus’s community involvement can be found on the Carbon Nexus website.

'The technologies that Carbon Nexus has created establish it as one of Australia’s most important research infrastructure investments. We're growing our research base, developing people and supporting emerging industries that will have a profound impact in the coming decade.' 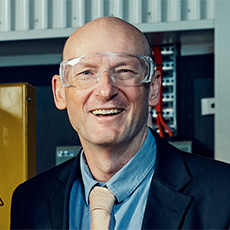 The establishment of Carbon Nexus was a catalyst for the growth of the Future Economy Precinct, where industrial partners are co-located on the Deakin University campus together with CSIRO to accelerate the commercialisation of advanced manufacturing technologies.

These technologies have included:

Commercialisation has attracted increased investment in the facility, enabling the purchase and procurement of additional equipment to improve and enhance research and development capabilities.

Carbon Nexus collaborates with local and international industry partners including Vestas, Boeing, the Ford Motor Company, Dow Chemical and Daimler, and has also facilitated the establishment of several new start-ups and businesses, including:

For more information about our research impact contact Deakin Research.