Prosecuting crimes such as genocide and cultural destruction is difficult, but the same techniques used to digitally preserve heritage can also be used to provide evidence of its destruction.

Based at Goldsmiths, University of London, Forensic Architecture undertakes advanced architectural and media research on behalf of international prosecutors, human rights organisations and political and environmental justice groups. The evidence of destruction collected by its interdisciplinary team of investigators, including filmmakers, software developers, archaeologists, lawyers, journalists and architects, is presented in political and legal forums, truth commissions, courts, and human rights reports.

Although originally intending to use his Visiting Fellowship to further his work investigating the destruction of Indigenous landscapes in Australia, Dr Zarandona was invited to be part of the Forensic Architecture team collaborating on the London Design Biennale project.

Curated by the Victoria and Albert Museum, the Maps of Defiance exhibition highlighted the processes by which Forensic Architecture has been working with NGO Yazda in the Sinjar area of Iraq to support and train their researchers in collecting, documenting and preserving evidence of Islamic State human rights abuses and genocide against the Yazidi people. It also explored the role digital cultural preservation has played in communities who have recently experienced trauma.

“I was tasked with locating and identifying historical images of the Sinjar region so we could compare before and after photographs to highlight the scale of the destruction,” Dr Zarandona said.

“I was also part of developing and writing a script for one of the two videos in the exhibition that explained the work of Forensic Architecture in Sinjar and its importance in collecting evidence of human rights abuses in the area.

“It was one of those instances when I was in the right place at the right moment to apply my expertise in heritage destruction.”

The project was ideal for Dr Zarandona, who has co-written a book chapter with Deakin colleagues Associate Professor Benjamin Isakhan and Associate Fellow Taghreed Jamal Al-Deen, on the destruction of Yazidi heritage by the Islamic State.

The book chapter is part of a forthcoming book, “Sites of Pluralism. Community Politics in the Middle East”, to be published in January 2019 by Hurst publishers, in collaboration with the Centre for International and Regional Studies, based at Georgetown University, Qatar. 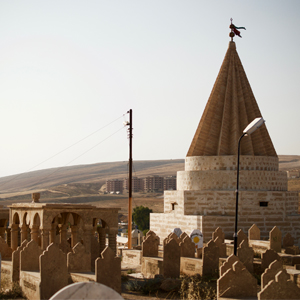