Junk food is the new tobacco

The smoke-filled offices of 1970s' Australia and sports championships named after cigarette brands are roughly comparable to the status of today's fight against obesity, according to Deakin University's Professor Boyd Swinburn, as reported in The Canberra Times.

''If the Government said: 'OK we are going to be the role models', it would be a very powerful thing,'' he said.

''If you look 30-40 years ago, smoking inside offices was considered normal. Government departments and hospitals went smoke-free long before it was made legislation. Role modelling was what we needed and now we need it on food.''

Professor Swinburn gave a lecture about childhood obesity at the University of Canberra last week titled, ''Overweight and obesity: whose fault is my fat?''.

''Right now we have an enormous absence of federal policy leadership on obesity prevention,'' he said.

''There is funding but the advertising is pretty average, it's not connected.

''It's very individualistic and telling people what they need to do." 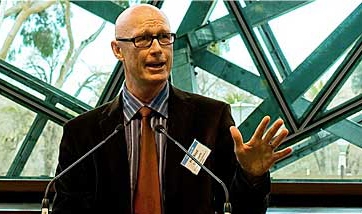