Accelerometers, video cameras and GPS recorders are providing a new glimpse into penguin foraging behaviour and revealing how they react to changes in their environment.

Ecologist Grace Sutton is using the latest technology to make discoveries about the fine-scale foraging movements of penguins in the sub-Antarctic – bringing new insights into their role in this sensitive ecosystem. Ms Sutton is studying for her PhD with Deakin University’s Centre for Integrative Ecology.

Through a partnership between Deakin and the University of La Rochelle, France – supported by a Nicholas Baudin Travel Grant – Ms Sutton initially spent three-months at Kerguelen Islands in the sub-Antarctic collecting data on macaroni penguins. She travelled to Reunion Island, from where the French Antarctic vessel took her to the Kerguelens.

The research has provided new information on macaroni penguin foraging ecology and gives a sense of the potential impact on fish stock recruitment due to larval fish mortality. This could have a negative impact on the commercial fishing industry and up the food chain.

“It has always been assumed that macaroni penguins perform deep dives to search for and capture krill and that fish comprise only a small part of their diet in the early stages of their breeding cycle,” she said.

“However, the cameras revealed that they consume a large number of larval fish during shallow dives close to the water’s surface.”

The cameras used to record the penguins’ adventures at sea are protected by a 3D-printed waterproof housing. They are attached to the back of a penguin with waterproof tape. Once the camera is fitted, the bird is released back to its nest and the device is removed when it returns.

“The devices are very lightweight and only left on the animal for a single foraging trip, to minimise stress and potential impact on the penguin’s normal foraging behaviour,” said Ms Sutton.

Part of the research involves examining factors that may influence a penguin’s foraging success, such as the abundance of a particular kind of prey. If a penguin happens upon a plentiful array of energetically-rich prey, this will increase their intake and reduce the amount of time it spends searching for food, expending less energy in the process. The presence of other foraging predators could lead to competition over the same prey, affecting the possibility of the penguin’s success in obtaining nourishment.

“We also need to take into account the intrinsic variables of each individual penguin, such as body condition. An animal in good condition would be physically stronger and able to catch more prey than those in a poorer body condition,” she said.

“As this is the first study to use video cameras with accelerometers, GPS and depth recorders on macaroni penguins, it’s important to do additional monitoring over multiple years to understand how this new behaviour is influenced by environmental conditions such as prey availability,” she said.

Ms Sutton has also begun researching little and African penguins, with the aim of generating a better understanding of their foraging and other behaviour at sea. She is due to complete her PhD in July 2019.

“I love travelling to new places, learning new things and being amongst nature. I enjoy the challenge of interpreting and discovering new things through the data that I’ve collected. I hope to continue doing research after my PhD and am currently looking for postdoc positions,” she said. 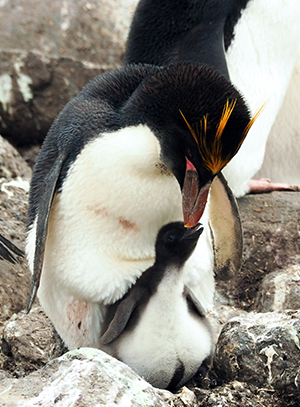