In a time of increasing environmental vulnerability, technology is coming to the aid of Victoria’s wildlife.

In an innovative project, Deakin University researchers are developing technology that will provide more useful data than ever before on the movement of wildlife in up to 20 of Victoria’s 44 national parks.

Professor Yong Xiang, Associate Head (Research) of the School of Information Technology, and his team have begun developing a system that will use machine learning and pattern recognition to identify if animals have been captured within sensor camera images and, eventually, identify the types of animals photographed.

The School of Information Technology’s Dr Longxiang Gao, Dr Tianrui Zong and Mr Yongqing Jiang are also working on the project, with Mr Jiang undertaking two three-month internships with Parks Victoria to support development and integration of the new system.

The project will be particularly valuable for monitoring populations after bushfire, floods or drought and to measure the impact of introduced predators, such as foxes and cats, on vulnerable populations. It will inform park management strategies such as planned burns, predator control, weed works and habitat restoration – replacing the costly and labour intensive process of using traps for wildlife monitoring.

The technology could provide a model for improved monitoring of wildlife across Australia and overseas.

Parks Victoria has recently used sensor cameras for four large scale projects: the Great Otway National Park (to determine the effectiveness of fox baiting); the Grampians; Mornington Peninsula National Park (to identify mammal species and their habitats within the park); and Wilson’s Promontory.

“Out in rugged conditions, more frequent temperature changes, wind and even raindrops were setting off the cameras, which meant there were many irrelevant images,” noted Professor Xiang.

“Many of the photos contained no animals at all and all the photos had to be sorted manually, which was extremely time consuming.”

“The use of cameras has been a big ‘learning curve’ for us,” he said. “It will make a big difference for us if we can remove the laborious step of trawling through thousands of photos.”

A Deakin graduate, Dr Antos explained that the arrangement with Deakin’s School of IT was facilitated through the Australian Mathematical Sciences Institute and had introduced Parks Victoria to a whole new element of expertise at the University.

The researchers have begun with a “proof of concept” phase – developing an algorithm that allows software to identify if an animal is in a photograph.

Over future stages, the algorithm will be made compatible with the Parks Victoria IT system; a central database will be developed for storage and compilation of the data; animals will be identified from video; and, finally, a wireless sensor network will be investigated, so data can be collected automatically within each park, removing the need for rangers or volunteers to manually collect data cards from each camera.

Professor Xiang is one of Australia’s leading wireless researchers, who has undertaken several notable projects, including, with a Deakin team, developing a wireless system for the MPower emergency lighting management system, which is being installed by organisations across the country. 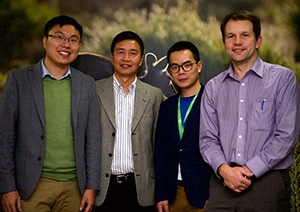 A collaborative research project between Deakin and industry aims to provide a new weapon in the fight against the illegal use of copyrighted data.

The Deakin Software and Technology Innovation Lab is gearing up with many industry collaborations.