Research news
20 November 2015
The new facility for the Geelong Centre for Emerging Infectious Diseases has been officially launched.

A new phase of research on infectious diseases has begun, with the official launch of the new high-tech laboratories of the Geelong Centre for Emerging Infectious Diseases (GCEID) this week.

The laboratories and research facilities are at the heart of GCEID’s  “One Health” approach to infectious diseases, extending and complementing the work of AAHL.

GCEID’s approach recognises that infectious disease vectors can rapidly adapt and cross over from wildlife, through domestic animals to humans.  GCEID researchers will seek to better understand and develop responses to the threat of emerging pandemic diseases such as Ebola, SARS and the Hendra virus, which were the result of cross-infections between humans and animals – whether livestock, pets or wildlife.

The centre has been strongly supported by all levels of government and is expected to provide up to 30 ongoing jobs - creating additional opportunities through flow-on commercialisation of biotech innovations in the region.

A key priority will be to strengthen the collaborations already established by GCEID and its members, and build new partnerships within Australia and overseas.

Sarah Henderson MP, Member for Corangamite, officially launched the GCEID laboratories, saying that the launch marked a “significant day in the life of the city, and of our reputation as a powerhouse of science, research, education and innovation.”

“Geelong has the ability to be the top regional centre in science research in Australia,” Ms Henderson said. “I am very proud of what we’re doing in this city… and of our efforts to bring the best and brightest to Geelong.”

Deakin University Vice-Chancellor Professor Jane den Hollander officially welcomed GCEID’s new Director, Professor Soren Alexandersen, an international virology and ‘One Health’ expert, who was recruited as one of the “best in the world” in his field of research. Professor Alexandersen recently arrived in Australia from his position as Executive Director of Canada’s National Centres for Animal Disease.

Professor den Hollander also acknowledged the many other researchers and scientists who will be involved with GCEID, “which is about science; science mattering; and us doing something with science for the people that we serve.”

“It is about dealing with the potential perils that we know exist in our community. Human populations are at risk, with potential impact on our economy, society and culture that could be catastrophic, unless we do what we are about to do here,” Professor den Hollander said.

“It is really hard work. It is not trivial and it is not simple… Scientists understand the challenges that face the globe, which are complex, multi-causal and can often result in unforeseen consequences.”

The Director of CSIRO’s One-Health Business and AAHL, Dr Kurt Zuelke, noted that the new premises marked an exciting step forward for GCEID “to have a tangible space in the middle of Geelong.”

“Each of the key players already has a strong global, national and regional presence,” he said.

“GCEID brings us all together, with a strong natural synergy, working with the City, the State and the Commonwealth to build on the biomedical expertise that we all have.”

Professor David Ashbridge, the CEO of Barwon Health, added that GCEID was fundamental to Barwon Health’s aspiration to be world class.

“We should be very proud of our city and our ability to come together to make a difference. This is a defining feature of Geelong - across politics, administration, health and science, our relationships go much deeper,” Professor Ashbridge said. 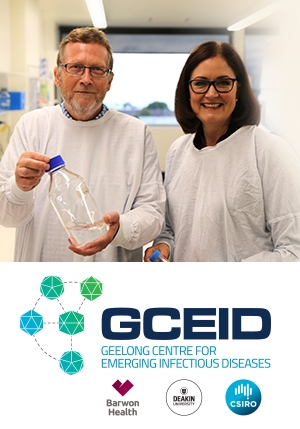 A GCEID team has discovered coronaviruses in Australia's wild birds, showing the nation is not as isolated from potentially serious host-jumping virus outbreaks as previously thought.