The rising incidence of Type 2 diabetes has been described as a “silent pandemic” in Australia and around the world. It affects around 24,000 Geelong residents – and is predicted to affect up to 3.3 million Australians by 2031.

A world-leading diabetes researcher, Dr Kathryn Aston-Mourney, has returned to her home-town of Geelong to pioneer a new approach to diabetes research that could eventually offer new hope to people with Type 2 diabetes.

A lecturer in Deakin’s School of Medicine, Dr Aston-Mourney has received a slew of awards and accolades over her 10-year career, including two post-doctoral research fellowships and three new grants that will allow her to progress her research.

She and her team have recently received a $32,000 grant from the Geelong Community Foundation, along with substantial grants from the Sir Edward Dunlop Medical Research Foundation and the CASS Foundation.

After growing up in Geelong, Dr Aston-Mourney studied at Melbourne University and then spent five years at the University of Washington, undertaking post-doctoral research in one of the most prominent diabetes laboratories in the world.

She was enticed back to Geelong in 2011 by an Alfred Deakin Postdoctoral Research Fellowship, and now leads her own team of four researchers within Deakin’s Centre for Molecular and Medical Research at Waurn Ponds.

Her team is trying a radically new approach to diabetes research by testing known drugs that have already been approved for use in humans, but for treating other conditions.

The fact that they have prior approval means that the drugs could reach clinical trials much sooner – removing up to five years from the wait time for final use - if proved to be effective.

"Diabetes is characterised by a progressive decline in the insulin-producing beta cells of the pancreas, which current treatments cannot stop,” explained Dr Aston-Mourney.

“Our goal is to identify drugs that can slow the loss of these beta-cells and slow down the progression of diabetes, or - by intervening when people are at risk - reduce their chances of getting the disease.”

Taking a new look at old drugs is proving beneficial around the world, with breakthroughs having been achieved in treating conditions ranging from epilepsy, to Alzheimer’s, to cancer. However, the research at Deakin marks the first time this approach has been used for diabetes.

Deakin’s Prof Ken Walder (Chair in Metabolic Diseases) made a ‘proof of concept’ breakthrough in 2012 when he discovered that a drug used to treat glaucoma could also treat diabetes. That drug is now in the final phase of development before being released to the public.

The team will screen 1,200 drugs, to assess their potential for treating diabetes. Using a complex formula, they will be able to measure each drug’s effect on the beta cells.

“The traditional approach to finding treatments has been to look at the cell problem and then try to develop drugs to fix it. However, diabetes is a very complex disease that we don’t fully understand. We will be looking at the overall health of the cell - starting from the end point, and working backwards,” said Dr Aston-Mourney.

“There is a long lead time before people get full-blown diabetes – with changes occurring in the pancreas up to 12 years before diabetes may be diagnosed. We could intervene anywhere along the pathway, including in the preliminary stages, to stop people from developing diabetes or getting worse once they have it, by delaying complications, such as cardiovascular disease, nerve damage or blindness.”

Returning to Geelong has proved a boon on many fronts for Kathryn Aston-Mourney. A former “Sweetheart of Swing” from Mathew Flinders Secondary College, who still plays oboe and saxophone, she has always been passionate about science, and pays particular tribute to her biology teacher and the founding force behind the Sweethearts, former Geelong identity Ross Lipson, who passed away last December.

Her interest in diabetes also lies close to home. Her grandmother, who inspired her interest, has lived with the disease for over 30 years. 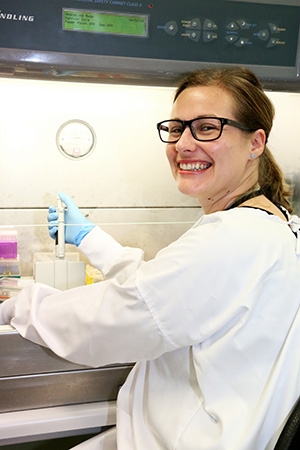 A new company spun out of Deakin and The Florey Institute of Neuroscience and Mental Health will explore the potential of promising new autism treatments.