While women comprise more than half of science PhD graduates and early career researchers, only 17 per cent of senior academics in Australian universities and research institutes are women.

Deakin is to take part in an innovative program that aims to improve this gender imbalance in the Science, Technology, Engineering, Mathematics and Medicine (STEMM) fields.

The Australian Academy of Science (AAS) and the Australian Academy of Technological Sciences and Engineering (ATSE) are partnering to create the Science in Australia Gender Equity (SAGE) initiative, which recognises that this “brain drain is a significant waste of expertise, talent and investment that is affecting Australia’s scientific performance and productivity.”

Deakin is one of 32 Australian universities, medical research institutes and government science organisations that will participate in the SAGE Pilot program, which is based on the UK’s highly successful Athena SWAN Charter, which has significantly progressed gender equality in its tertiary sector.

The President of the AAS, Professor Andrew Holmes, launched the Australian SAGE Pilot initiative at Parliament House in Canberra on September 16. The event was attended by Deakin’s Director of Equity and Diversity, Dr Nadine Zacharias, and Deakin microbiologist Dr Melanie Thomson.

Dr Zacharias said that the SAGE project offers Deakin a great opportunity to make a difference to gender equity in STEMM areas.

“Deakin is already better placed than many other Australian universities in this regard, but the Athena SWAN program has been shown to be very successful. It provides us with a framework and principles, and the opportunity to work from a consistent evidence base,” she said.

“We know that improving gender equity in this field is about changing attitudes and assumptions about research and STEMM careers. Men tend to have linear careers, while women have periods out of research, particularly due to caring responsibilities.”

Dr Zacharias noted that one of the major glass ceilings encountered by women academics in STEMM fields is in the transition from senior lecturer (level C) to Associate Professor (level D) levels. She explained that some of the causes for this include leadership expectations and a lack of confidence.

“We need to challenge assumptions and stereotypes, and broaden the idea of merit, so that performance is not just measured by the number of papers published, but consideration is given to quality, citations, collaborations, and available time to produce the output.

"The SAGE program will also help us to identify where the talent is and observe how women are moving through their careers.”

The Athena SWAN charter began a decade ago with just 10 universities in the UK, but has grown today to include nearly every UK STEM education and research institution. The program was found by the House of Commons to be the UK’s “most comprehensive and practical scheme to improve academics’ careers by addressing gender inequity.”

A peer-review process results in decisions to award gold, silver or bronze ratings. Achieving these awards is a major challenge – with organisations taking at least two years before they become eligible for an award. 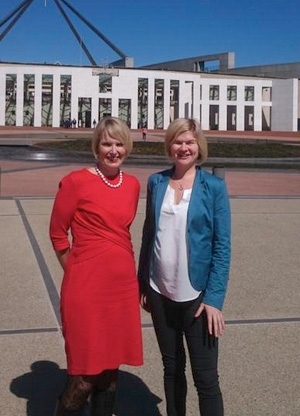 At the SAGE launch in Canberra - Deakin microbiologist Dr Melanie Thomson and Director of Equity and Diversity, Dr Nadine Zacharias.