Speaking for the bandicoot

Research news
08 April 2014
Deakin student Sarah Maclagan has embarked on a mission to save an endangered bandicoot.

The shy marsupial is about the size of a small rabbit and is vulnerable to predators such as foxes and cats, but, given appropriate corridors, it can live alongside human populations.

Ms Maclagan, from the School of Life and Environmental Sciences, is nearing the end of her PhD on the “Ecology of the Southern Brown Bandicoot in Peri-urban Melbourne.”

Her campaign began after the State Government dropped its original plans to create two wildlife corridors through new housing estates around Cranbourne that would have significantly increased the bandicoot’s chances of survival - shielding them from the impact of Melbourne’s rapidly growing urban sprawl.

Developers, particularly the Property Council of Australia, had complained about the cost of the strategy.

Ms Maclagan has spent a considerable amount of time in the field over the past two years, working with volunteers, taking health samples and radio tracking bandicoots in areas around Koo Wee Rup, Bunyip, Cranbourne and on Quail Island.

“This issue is about the tyranny of small changes,” Ms Maclagan said. “My concern is that we seem to think it’s okay to keep shifting the bandicoot further and further out as urbanisation expands. They are a very adaptable species. If we gave them half a chance, we would be able to accommodate them amongst us.”

The bandicoot was once common across the Melbourne region, but the closest population to the city now is at the Cranbourne Botanic Gardens. The original strategy, which was developed as a draft in 2011, provided for a link between the Cranbourne gardens and other populations in the Koo Wee Rup area. The corridors took up about 72 hectares from the 5260 hectares that were marked for housing growth.

Ms Maclagan’s research shows that the bandicoots can “live and breed successfully within narrow corridors of vegetation, even when they’re next to residential areas. They have done well in Koo Wee Rup, due to the habitat’s greater connectivity.”

“We believe that connectivity between the habitats is the “key” ingredient for the health of the bandicoot populations,” she said.

The final version of the strategy focuses on fox control, with protection of vegetation still to be determined within an implementation plan.

Ms Maclagan joined more than 70 concerned residents at a meeting in Cranbourne recently to urge the Federal Environment Minister (and Flinders MP) Greg Hunt not to sign off on the strategy. As the bandicoot is an endangered species, the Federal Government must approve the plans, according to the Environment Protection and Biodiversity Conservation Act.

An outcome is expected by the end of April. 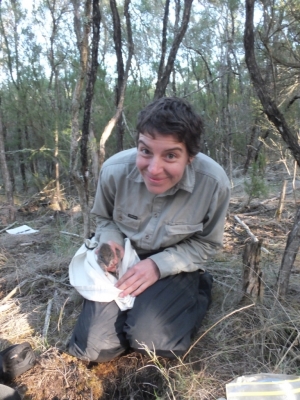