The journalist as an historian

Research news
14 May 2012
They do get the jump on us, says Professor David Lowe.

Phil Graham, co-owner of the fabled Washington Post, once described journalism as the “first rough draft of history”.

As I and my fellow historians at the Alfred Deakin Research Institute move to establish the breakthrough Contemporary History Group – the first of its type in Australia - that comment, and the overall role of journalists, is high on our mind.

Accordingly, we have invited two of Australia’s finest journalists, Hugh Lunn and George Megalogenis, to help us launch the new history group on June 20th.

Essentially, the journalists get the jump on us historians and we have to follow the contours of what they define as important.

In Australia this is particularly true of our military and political history.

War correspondents such as Charles Bean and Gavin Long, both subsequently Official Historians, wrote first versions of Australia’s involvement in the world wars and influenced much of the historiography.

Many other famous war correspondents, such as Chester Wilmot, Dennis Warner and Alan Moorhead, wrote fine histories and memoirs and these are now classics of Australian contemporary history.

Hugh Lunn’s “first rough drafts of history” came to us from the jungles of Vietnam where as a young reporter for Reuters, he covered that conflict.

Journalists from the Vietnam War, more than any other war, set the agenda for future historians.

After all it was a journalist, the American Walter Cronkite, who probably did more to bring about the end of the Vietnam War than any other person.

After Cronkite broadcast his news bulletins from Vietnam he returned home to write:

“To say that we are closer to victory today is to believe, in the face of the evidence, the optimists who have been wrong in the past.

“To suggest we are on the edge of defeat is to yield to unreasonable pessimism. To say that we are mired in stalemate seems the only realistic, yet unsatisfactory, conclusion.

“On the off chance that military and political analysts are right, in the next few months we must test the enemy's intentions, in case this is indeed his last big gasp before negotiations.

“But it is increasingly clear to this reporter that the only rational way out then will be to negotiate, not as victors, but as an honourable people who lived up to their pledge to defend democracy, and did the best they could.”

Shortly after the US president, Lyndon Johnson, is reported to have said “if I have lost Cronkite, I have lost Middle America” and soon after announced he would not be seeking another term.

In his book, Lunn also exposed the ultimate futility and tragedy of Australia’s involvement in that conflict.

He was particularly damning of the military’s insistence on its version of events being reported, rather than the truth, something for which future generations of war correspondents and historians alike will be grateful.

Essentially what Cronkite, Lunn and others did was record the great disconnect between the official image of monolithic communism being tackled by the Free World and the reality of bewildered, frightened villagers trying to survive multiple forms of oppression.

In Australian politics, two outstanding journalists who have shaped the contours have been Alan Reid and Paul Kelly.
Kelly's definition of the “Australian Settlement” as a collection of tenets of faith around protectionism, white Australia, reliance on Britain, centralised arbitration and so on which all began to come undone in the 1970s and 1980s is still influential.

George Megalogenis, who like Kelly works at The Australian, is also filling an incredibly important role, not just for future generations of historians, but also for economists and political leaders.

His recent book, The Australian Moment: How We Were Made for These Times, looks at the uniquely successful way that Australia has coped with a series of disasters including the Asian financial crisis, the dotcom meltdown and the Global Financial Crisis.

Megalogenis writes: “There's no better place to be during economic turbulence than Australia.

“Brilliant in a bust, we've learnt to use our brains in a boom.

“Despite a lingering inability to acknowledge our achievements at home, the rest of the world asks: how did we get it right?”

Megalogenis attempts to answer that question via interviews with political leaders as well as sifting through recently declassified documents.

The words of his peers suggest he has done the job particularly well.

I also particularly like David Marr’s description of George: “This man is perhaps the sanest journalist in Australia.”

That is encouraging indeed for my colleagues and I as we welcome George and Hugh into our midst next month, and then seek to build on the body of work - the contours - they have left for us.

Professor David Lowe is one of Australia’s pre-eminent historians and the Director of the Alfred Deakin Research Institute. 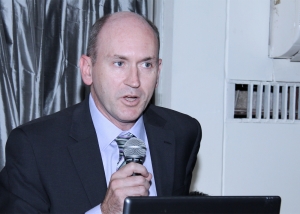 Essentially, the journalists get the jump on us historians and we have to follow the contours of what they define as important, says Professor David Lowe.