It can take you to places you’ve never been, or that don’t even exist, from the comfort of your living room, but virtual reality technology has far reaching and more serious applications.

The spider running up the person’s arm is not real, but it feels real and so does the fear. Welcome to exposure therapy via virtual reality. With a combination of a trained therapist and immersive technology, the fear of spiders, or other phobias, could be gradually, and safely, reduced.

And that’s just one application of virtual reality, or VR. Most commonly associated with the gaming and entertainment industries, VR holds immense potential in other areas, from military training to preparing surgeons for complex procedures.

“What we’re experiencing now is the second wave of VR technology and the sky is the limit,” said Dr Ben Horan, Director of Deakin University’s Centre for Advanced Design in Engineering Training (CADET) Virtual Reality Lab.

“We’ve seen rapid development in the past few years because of advances in the different technologies involved, from 3D modelling and software, to electronics providing high resolution digital displays.”

With the release of consumer-ready headsets and the ubiquity of smartphones, more people than ever before can access a VR experience and the technology has applications for multiple industries.

“In a training context for the military or emergency services, VR can be used to expose personnel to situations that can’t be practically recreated in real life, but that they need experience in dealing with. In the medical sector, VR can be used to train doctors for ‘what if?’ scenarios, or pre-training for operations. At CADET, there are researchers working on a project that allows surgeons to practice removing virtual tumours from 3D printed models.”

Dr Horan explained that VR also has “huge potential” in education – history students, for example, could be immersed in realistic historical experiences – and for virtual tourism.

“VR can help overcome barriers to access travel, such as lack of time or money, or physical limitations. With 360° videos and photos, you can put on a headset and have an experience that is close to the actual experience.”

The integration of virtual reality into such a wide range of industries illustrates how important it is to train the next generation of experts in the field. Deakin is the first university in Australia to offer a dedicated course in VR and augmented reality  (AR) – the Graduate Diploma of Virtual and Augmented Reality.

Deakin has also partnered with EON Reality, a world leader in VR/AR knowledge transfer, specialising in education, industry and edutainment. The Interactive Digital Centre (IDC) Hub, to be located in Melbourne’s CBD, will house state-of-the-art VR and AR equipment, where students will learn the skills needed to be successful when creating AR and VR content for industry and education.

A demonstration of Deakin’s Virtual Reality capabilities will be one of the highlights at Deakin’s stand at the Australian International Airshow 2017, 3-5 March. 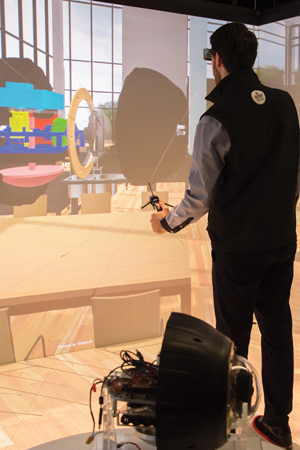