While regular bursts of activity during lesson times have previously been shown to benefit children's physical fitness and concentration, these latest findings are the first to demonstrate that children's brains also work more efficiently and they have better control over their actions after short active breaks throughout the day.

Dr Emiliano Mazzoli, a Postdoctoral Research Fellow in Deakin's Institute for Physical Activity and Nutrition (IPAN) said the research, which received funding from the Victorian Department of Education and Training, was globally significant because it provided further evidence that children do not need to sit all day to learn.

Researchers set out to see if physically active breaks of around five minutes duration could improve children’s executive function (brain activity) as well as their impulse control.

They recruited children in grades one and two (6 - 8 years old) at three Melbourne primary schools and teachers at two of those schools were trained to deliver either simple or complex active breaks to their class over a six-week period. Simple active breaks included running on the spot whereas more complex active breaks were those that required attention and decision making, such as games like 'Simon Says'. The third school continued with usual classes and no active breaks.

Children’s thinking skills were assessed with computer-based tests, and a non-invasive tool, Near Infrared Spectroscopy, was used to measure brain activity. Sitting, standing, and moving patterns were measured with devices children wore on their thighs during school hours. On-task behaviour was observed in the classroom as an indicator of focus in class.

"You can think of this a bit like a car driving a greater distance using less fuel," Dr Mazzoli said. 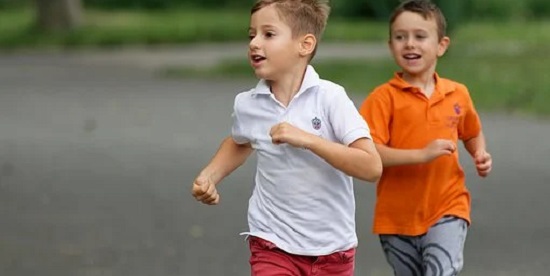