Archaeological dig could show life in Oz is 50,000 years older than first thought

New evidence discovered by a team of scientists in south-western Victoria suggests people may have been living in Australia 120,000 years ago – more than 50,000 years longer than previous estimations.

Researchers believe the site could contain "middens" created by Aboriginal people during the period known as the last interglacial age – which was roughly 115,000 to 130,000 years ago.

Dr Sherwood, an earth scientist and Honorary Associate Professor within the School of Life and Environmental Sciences at Deakin's Warrnambool Campus, said Moyjil could confidently be assigned as a remnant of the last interglacial age, well beyond the currently accepted ages of the oldest known human sites in Australia and New Guinea.

"The site contains the remains of shellfish, crabs and fish in cemented sand, together with charcoal, blackened stones and features which resemble fireplaces," Dr Sherwood said.

"What makes the site so significant is its great age. Dating of the shells, burnt stones and surrounding cemented sands by a variety of methods has established that the deposit was formed about 120,000 years ago. That's about twice the presently accepted age of arrival of people on the Australian continent, based on archaeological evidence.

"A human site of this antiquity, at the southern edge of the continent, would be of international significance because of its implications for the movement of modern humans out of Africa."

Along with Dr Sherwood, the core investigatory team includes the University of Melbourne's Professor Jim Bowler; Professor Ian McNiven of Monash University's Indigenous Studies Centre and the ARC Centre of Excellence for Australian Biodiversity and Heritage; and Dr Stephen Carey, an earth scientist from Federation University.

Dr Sherwood said researchers had strived for years to rigorously test the hypothesis of a human origin for the site, but the findings were not yet conclusive, because the team had not discovered material such as stone artefacts or human remains which would provide absolute proof of human origin.

"The unusual shell deposit at Moyjil has been subjected to a degree of scrutiny rare if not unprecedented in Australian archaeology," he said.

"We recognise the need for a very high level of proof for the site's origin. Within our own research group the extent to which members believe the current evidence supports a theory of human agency ranges from 'weak' to 'strong'. But importantly, and despite these differences, we all agree that available evidence fails to prove conclusively that the site is of natural origin.

"What we need now is to attract the attention of other researchers with specialist techniques which may be able to conclusively resolve the question of whether or not humans created the deposit."

The team's findings have been published in the Proceedings of the Royal Society of Victoria, in a series of six papers reporting on the suite of techniques used to investigate the age and origin of the Moyjil shell deposit.

The project has been overseen by the Moyjil Project Committee comprising the region's Traditional Owners, Eastern Maar, Gunditjmirring and Kuuyang Maar, as well as government agencies and researchers. 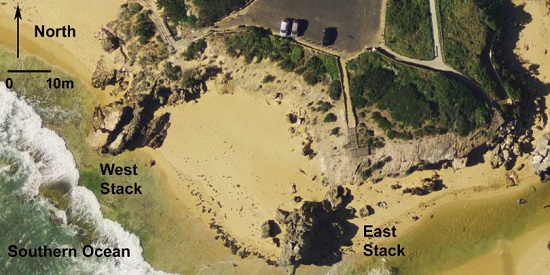 Deakin University is pleased to announce it has joined Science and Technology Australia (STA), Australias peak body that represents more than 90,000 scientists and technology experts.

Conditions are ripe for a significant thunderstorm asthma season that could rival the 2016 epidemic and come at a time when Victorias health system is already under immense strain as a result of the COVID-19 pandemic.