Birds of a feather grow differently according to the weather

Global latitudinal patterns in animal size and shape have long been observed, where animals in the tropics are generally smaller and have longer appendages - such as ears, beaks, and limbs - than those in temperate regions.

The recurring question of why these patterns exist has challenged scientists for decades. Researchers say it could be because smaller bodies and longer appendages help animals keep cool in tropical environments, due to the increased surface area for heat loss.

Other possible explanations include impacts of temperature on growth in early life; higher predation risk in the tropics; or effects of climate on starvation risk and foraging behaviour.

Understanding why global geographic patterns in animal size and shape exist helps scientists understand the evolution of traits that are fundamental to many aspects of an animal's life, and how animals might adapt as the climate warms.

The research shows that shorebirds in north-western Australia, around Broome, are smaller and have longer bills than members of the same species in south-eastern Australia.

These patterns in shorebird size and shape are consistent across species with very different traits, including those that migrate to different parts of Australia from their arctic breeding grounds, and species that live in Australia year-round.

The researchers concluded that latitudinal differences in size and shape are most likely due to thermal adaptation to hot conditions on the northern Australian coast.

"Smaller birds with longer bills have a greater area for heat loss, and birds can even increase blood flow to their bill to enhance heat loss in hot weather," said Dr McQueen. "These adaptations of size and shape are likely important for shorebirds that forage on hot coastlines where there is little shade from the sun.

Although other explanations for geographic patterns in shorebird size and shape are possible, thermal adaption provides the best overall explanation for the consistency of our results across ecologically diverse shorebirds." 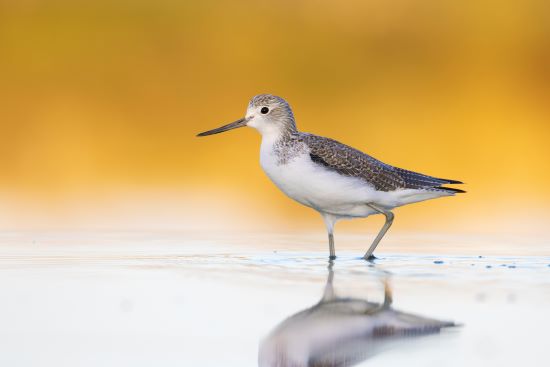