World-first research from Deakin University has estimated some of the undisclosed, lingering financial costs of natural disasters, highlighting the need for a more comprehensive government recovery policy in the aftermath of the recent floods in eastern Australia.

Data analysed from the 2010/11 Queensland floods shows the financial impact went far beyond immediate damage, including a significant reduction in tax revenues from the most heavily flooded areas.

Researchers from the Centre for Disaster Resilience and Recovery at Deakin Business School estimate $400 million of tax revenue was lost from the Brisbane river catchment area - the region hardest hit by the floods - in the three years post-disaster.

On top of this, they calculate another $400 million was diverted out of the local economy in the post-disaster period, placed instead into super funds, as concerned residents worried for their future.

Lead researcher Merve Kucuk recently submitted a PhD thesis analysing data from the Australian Longitudinal Individuals File (ALife) by the Australian Taxation Office, comparing changes in economic conditions of taxpayers living in the Brisbane River Catchment Area with those living in similar parts of Australia that were not affected by floods.

Ms Kucuk said the research provided substantial evidence that the total costs of natural disasters were significantly beyond the immediately assessable damages.

"If we predict natural disasters are going to increase in frequency, which climate science says they are, then we need a full picture of what the cost is, who is going to pay for that and how," Ms Kucuk said.

"Right now, the disaster relief payment is $1000 for adults and $400 for children. But why is it that much? Is that enough? We believe these budgets can be optimised to help individuals, and the economy, recover better.

"It's critical we have policies that enable a full recovery from, and build resilience against, natural disasters. That relies on understanding the full extent of their costs. These include undisclosed costs, such as the flow on effects of disasters, that go far beyond the common dollar value attached to a flood that's typically focussed on material damages and post-disaster aid."

The Centre's research showed that after the 2010/11 Queensland floods, tax revenue decreased by 5 per cent in the disaster year relative to the comparison group. A novel finding in the study is the changed patterns in tax deduction claims in the disaster zone in the aftermath of the disaster.

Professor Ulubasoglu said taxpayers increased their deductions on work related travel, clothing and 'other' expenses in the disaster year. They also increased tax deductible gifts and donations, which is common after a disaster.

"For high income individuals, the increased tax deductions lasted for several years following the floods, with most of the increase in tax deductions being driven by professionals and technicians in high-technology sectors," he said.

"But that tax money still has to come from somewhere if we want to maintain national spending on critical government projects and services, and it comes out of all Australians' pockets. We are all impacted financially by these disasters, even if we are not a direct victim of the disaster itself."

"We see this often after disasters - even recently during the pandemic - where people's risk and time preferences change and they are more concerned about their future. As a result, they move away from a focus on living, and spending in the moment," he said.

"The change in preferences means earnings are saved instead of being spent. Saving money is good, as long as it's converted into investments and productive activities. But over-saving means there is less money being put back into the local economy in that important recovery period." 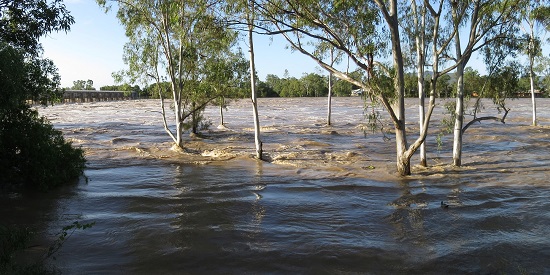