A Deakin academic is calling for Indigenous teachings to be included in Australian school curriculums if the country is to take meaningful steps towards reconciliation.

The call comes as Australia marks National Reconciliation Week from May 27 to June 3. The week is a time when Australians are encouraged to reflect on how reconciliation can be achieved between First Nations people and the wider community.

School of Education researcher Aunty Gail Kunwarra Dawson, Bunwurrang Elder, said Indigenous knowledges, stories, and language had as much place in Australian classrooms as maths, English and science. Indigenous people were often consulted on ways reconciliation could be achieved, but she said it was rarely followed by action and this was a space where real change could occur.

"What we've had in the past is a lot of talking but not a lot of action," Aunty Gail said.

"Australia’s education system treats First Nations students and community members as deficit compared to the wider community. Our traditional knowledge has always been regarded as less important than other Australian origin stories.

"What we have asked for, always, is that Indigenous voices inform the policies and curriculums that shape the minds of future generations. If we are to make any meaningful steps towards reconciliation, Indigenous voices must be heard and acknowledged."

Aunty Gail, a retired schoolteacher and principal, will soon have a paper published that examines Aboriginal Elders' stolen and disrupted identities as teachers.

The report, The Construction of an Indigenous Teacher: An analysis of two framing documents for education, uses traditional Aboriginal storytelling to explain the damaging impact of current western education policies that exclude Indigenous knowledge and teachings from current education policy. Aboriginal people's hope for reconciliation through the Uluru Statement is also described in the ancient story of injustice and reconciliation included in the report.

The first traditional story Aunty Gail shares in her report is a Story of Crow. The crow steals fire, a metaphor for the ancient fire of knowledge taken by the colonists. She said this ancient knowledge was then distorted, misused, and its theft perpetuated in an education system that suppressed Indigenous voices and privileged non-Indigenous ways of being. The second story highlights the conflict that occurs when people fight over resources and the value of reconciliation.

"In this analysis and through these metaphors, we see that the policies that systematically oppress Indigenous knowledge and remove truth telling from students' education damages the Australian identity. The Uluru Statement pushes for recognition of Indigenous Voice to create a better future for all, and an inclusive robust Australian identity."

"My report shows how entrenched racism in our education system disregards Indigenous knowledge and perpetuates inequality between Indigenous and non-Indigenous Australians. That is a loss to all Australians. My study showed me that through the clear, simple words of the Uluru Statement we can bring Voice, Truth, and Treaty to all Australian people." 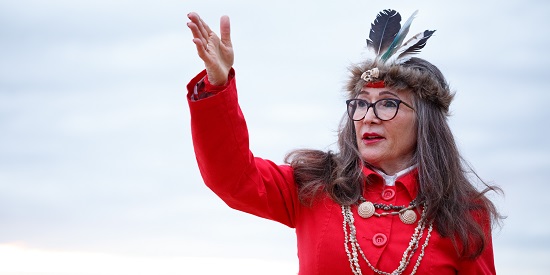 Media release School of Education, Faculty of Arts and Education