Media release
25 September 2014
Millions of migratory birds that fly tens of thousands of kilometres between their homes in Australia and Siberia are facing annihilation as development destroys the vital feeding grounds they rely on during their epic journeys, a Deakin University avian expert has warned.

Millions of migratory birds that fly tens of thousands of kilometres between their homes in Australia and Siberia are facing annihilation as development destroys the vital feeding grounds they rely on during their epic journeys, a Deakin University avian expert has warned.

Director of Deakin's Centre for Integrative Ecology Professor Marcel Klaassen has joined a growing chorus of leading scientists alarmed by a sudden and dramatic drop in the number of shorebirds finally arriving in Australia after their legendary flights across the globe.

"The rate of decline among some of these bird species is such a dramatic drop in numbers as to be truly depressing,'' Professor Klaassen said.

"For instance, the rate of decline in numbers of one of these, the Curlew sandpiper, is a staggering 10 per cent per year which means they face extinction within a decade,'' he warned.

Professor Klaassen joined many of the world's leading avian experts at the 9th Australasian Shorebird Conference in Darwin where countless papers delivered warned of a dire future for migratory shorebirds as habitat destruction, human disturbance and predation take a cataclysmic toll.

"An endless number of papers were presented at the conference that painted the bleakest picture of the imminent collapse of some of the world's greatest and most remarkable bird species,'' Professor Klaassen said.

"Almost every paper that was presented painted a picture of incalculable loss of shorebirds on their flight paths and the situation as it was depicted was the most depressing look at the future imaginable.

"So momentous are their epic voyages that these birds lose two-third of their total body weight on their journey and their feathers are worn down to quill.

"Some fly as many as 10,000km non-stop in an incredible feat of endurance and some wing vast distances over a lifetime equivalent to flying to the moon.''

Professor Klaassen joined other concerned scientists at the conference who were spurred by the latest research to call for immediate government intervention and action to address the catastrophe facing migratory shorebirds.

"When the Australasian Shorebird Conference met two years ago in Adelaide, it was noted then that things were looking grim for the birds because of the noticeable drop in their numbers.

"These shorebirds rely on a chain of suitable habitats along their 15,000km route. If, in that chain, there is a weak link, they are doomed.''

Professor Klaassen said the birds were being threatened by massive development, particularly around the Yellow Sea and on tidal flats and wetlands they have traditionally relied on for food to refuel for their fantastic, long flights.

"We call for collaboration and co-operation between governments in the spirit of international agreements and involving all the countries covered by the bird's flight paths to protect the shorebirds and their habitats,'' Professor Klaassen said.

Professor Klaassen heads the CIE where scores of researchers have been examining the migratory behaviour of shorebirds to see how well they cope with changes in their environments on their epic trips between the northern and southern hemispheres.

"One thing we are doing is using geolocators to track the key sites where the birds go to better understand what allows them to successfully migrate and what type of fuel management is needed en route.

"Some areas are so crucial to their survival during their flight journey that any disruption to those sites means certain death.''

Professor Klaassen said researchers and volunteers in China, Taiwan and Korea had all expressed concern about the visible drop in migratory shorebird numbers and warned that international collaboration is needed to address the crisis facing these remarkable shorebirds.

"We all encourage national governments to recognise and acknowledge the important role of the East Asian Australasian-Flyway Partnerships and do much more to protect wetlands and coastal habitat for future generations.''

PHOTO: Pictured is Director of Deakin University's Centre for Integrative Ecology, Professor Marcel Klaassen, with a greater sand plover bearing a geolocator, shortly before its release and take-off for its breeding grounds in Mongolia from Broome, WA. 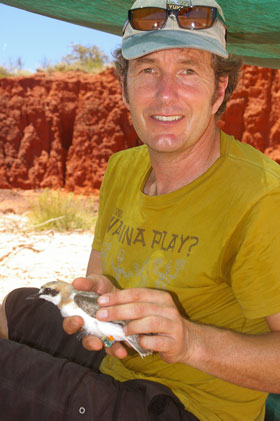