Deakin researchers have found a new use for old glass – grinding it up as a substitute for sand to make a type of concrete commonly used in the construction industry.

The Deakin School of Engineering researchers have discovered ground recycled or waste glass can be used instead of sand when making polymer concrete, a material often used in industrial flooring.

Senior engineering lecturer Dr Riyadh Al-Ameri said the addition of glass resulted in a stronger product that was less costly to produce.

"This research provides the evidence the construction industry needs to see the potential of glass as a substitute for sand when making polymer concrete and, potentially, concrete," Dr Al-Ameri said.

"Worldwide, the construction industry represents six per cent of global GDP, according to the World Economic Forum.

"Concrete is a major construction material and sand is one of its primary components, so finding an alternative to sand makes good economic sense.

"Mined sand requires washing and grading before it is added to aggregate, cement and water to make concrete.

"We have found that substituting sand with ground recycled glass makes the polymer concrete stronger and is a sustainable use of one of the major types of recyclables in the domestic waste stream.

"Any changes that reduce the cost of production will lead to significant gains across the industry, potentially on a global scale," Dr Al-Ameri said.

Polymer concrete is a type of concrete that uses polymers, typically resins, to replace lime-type cements as a binder.  This produces a high strength, water-resistant material suited to industrial flooring and infrastructure drainage, particularly in areas subject to heavy traffic such as service stations, forklift operating areas and airports.

Orca Civil Products Director Alan Travers said the research partnership had produced results that would be useful in taking the concept further to commercialisation.

"The specific type of waste glass used in this project was unsuitable for recycling back into glass and the amount that is stockpiling is becoming a community problem," Mr Travers said.

"The concept has even more appeal to us because of predicted shortages of natural, mined sands in the medium term."

Dr Al-Ameri said the next stage of Deakin's research would look at substitutes for the aggregate in polymer concrete, optimising the substitution rate, assessing durability, and the commercialisation of the new product. 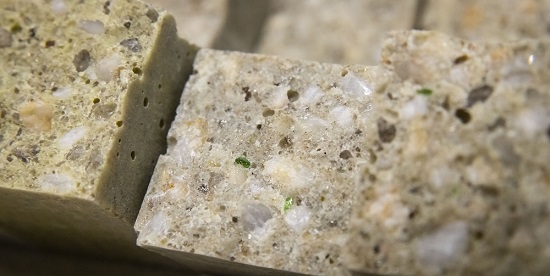