Deakin scientists first to show why rosellas vary in colour

The bright coloration of rosellas can be predicted from space, and may be set for a shift due to climate change, according to new Deakin University research into the evolutionary processes behind one of the world's most diversely coloured parrots.

Rosellas vary from a deep crimson red to a pale yellow across south-eastern Australia, but until now scientists haven't known why.

Research recently published in the Journal of Biogeography shows habitat background and climate are major drivers of the colour variation in this species.

Paper co-author Dr Mathew Berg, from the Centre for Integrative Ecology in Deakin's School of Life and Environmental Sciences, said the rosella's colour variation was extreme for a single species.

"For most birds, and many other animals, when they have orange, yellow or red colouration that is due to carotenoid pigments, which come from food, mostly fruits and vegetables," Dr Berg said.

"But parrots have a completely different pigment system - psittacofulvins - found nowhere else in nature. They don't take it in through their diet, instead it's thought to be produced in their feather follicles.

"While we've long known how unique parrot coloration is, we haven't known what function the colour fulfils or why it varies within or between species. And that's unusual because parrots are some of the most colourful animals in the world."

Crimson rosellas are most common around coastal Victoria, New South Wales and south-eastern Queensland. Yellow rosellas are typically seen in the drier areas along the Riverina in Victoria, New South Wales and South Australia. 'Intermediate' birds, which come in varying shades of orange, can be found around the Adelaide hills, as well as small pockets of Victoria and NSW including the King Valley and Wodonga.

The Deakin study is an important test of 'Gloger’s Rule', a scientific theory developed by German zoologist Constantin Lambert Gloger in 1833, based on his observations that birds tend to be more darkly pigmented in more humid habitats.

Dr Berg said it was not always clear what factor, or combination of factors, led to this occurrence, as most previous studies had only been able to look at one variable in isolation.

"It's only now thanks to the rapid advances in technology that we’re able to look at really big sets of climate data, access satellite measurements of vegetation coloration over large areas, and conduct advanced analyses to look at all the possible factors in combination," he said.

"When we crunched the numbers we found the rosellas' colours seemed to be closely related to the colour of the vegetation of their habitat, links which may arise to help them be more camouflaged from predators or conversely to stand out to other members of the species.

"We used data gathered by satellites to measure the habitat coloration across eastern Australia, and found that this was a good indication of the colour differences of leaves in the habitats, and also the best predictor of where to find the crimson birds.

"Rainfall and temperature were also important factors. Areas with hot summer temperatures were the best predicator of where to find yellow birds, which could be because the lightest colours afforded the least heat stress, suggesting thermoregulation was also an important factor in coloration."

While Australia's crimson rosella populations are abundant, Dr Berg said the study's findings could have important implications for the conservation of other parrot species, with about a third endangered or threatened by extinction.

"Parrots are one of the most threatened groups of birds in the world, mostly due to habitat destruction, but also due to introduced species and trade for pets," he said.

"They play a pivotal role in our ecosystem, excavating hollows, pollinating plants and spreading seeds, but they have a big conservation problem.

"Work like this increases our understanding of the habitat requirements of parrots, why they can live in some areas and not others.

"Changes from habitat modification and climate change might affect where parrots are able to occur and where they'll disappear from. This research will help us predict when and where a species decline will happen and why.

"We now hope to model different climate change scenarios and where the parrots might move to. For example as Australia gets hotter and drier we might see numbers of yellow rosellas expand and replace some of the colour forms in other areas." 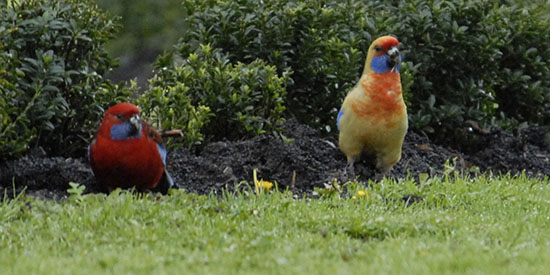