Media release
15 February 2015
The role rainforests play through storing carbon in the battle against climate change is well understood, but Deakin University scientists now believe the humble swamp, or freshwater wetland, could be up to 50 times more effective.

The role rainforests play through storing carbon in the battle against climate change is well understood, but Deakin University scientists now believe the humble swamp, or freshwater wetland, could be up to 50 times more effective.

A team of Deakin researchers from Deakin's Centre for Integrative Ecology within the School of Life and Environmental Sciences are now undertaking an Australian-first study to investigate how wetland areas could help us to win the battle against climate change.

International expert on freshwater and estuarine ecology Dr Rebecca Lester said the team's research involved quantifying the level of carbon stocks in south-west Victorian wetlands, as well as identifying the impact of wetland restoration on those stocks.

"A third crucial goal will be to define robust methods for measuring carbon stocks - through measuring pH and nutrient concentrations, for instance - so that rapid, affordable assessment can be made across large numbers of wetlands," Dr Lester said.

"The measurement tools will enable natural resource managers and landholders to reliably estimate and enhance their carbon sequestration, adding to the global effort in addressing climate change.

"Our current usage of natural resources is unsustainable, and it is likely to become even more so under climate change.

"Our preliminary studies suggest that wetlands can sequester up to 33 per cent of the carbon in terrestrial soils, yet they only take up about four per cent of the earth's land surface."

Dr Lester said the researchers were confident wetlands were a huge storage that had not previously been quantified in efforts to account for source and sinks of carbon globally.

"While research on carbon capture has so far focussed on terrestrial and coastal ecosystems, such as carbon farming initiatives and so-called 'blue carbon' capture through seagrass, recent data indicates freshwater ecosystems could be up to 50 times more effective in carbon burial efficiencies, compared to land-based ecosystems like rainforests," Dr Lester said.

"Despite the clear potential for wetlands to mitigate climate change, to our knowledge, this is the first study to quantify sequestration in temperate freshwater Australian wetlands, and one of few worldwide."

Dr Lester has received a Thomas Davies Research Grant from the Australian Academy of Science to undertake the wetland project as part of a Deakin team.

Dr Lester, who has worked on major projects in the Coorong and Murray-Darling Basin in Australia and the Colorado River in the USA , specialises in ecological response modelling, particularly in relation to the impact of human use on aquatic ecosystems.

"Biosequestration, meaning carbon capture and storage through biological processes, is regarded as one of the single largest opportunities for reducing CO2 emissions in Australia," she said.

"One of the reasons wetlands may be better than forests at carbon capture is because of the way sediments and organic matter, such as leaves, build up under water. There, they are likely to break down more slowly, thus acting as a carbon sink.

Once covering around 10 per cent of the earth's land mass, wetlands - which are often seasonal - are defined as low-lying areas that support plants and animals that rely on surface water.

They range from such high profile wetlands as Kakadu, or Victoria's Hattah Lakes, to any local swamp. Many, such as the Koo Wee Rup swamp in Gippsland, have been drained, as their characteristic build-up of organic matter makes excellent farming land.

"Yet, in the future, their agricultural value will have to be weighed against their value as carbon sinks," Dr Lester said.

Linked to a larger collaborative project, involving Flinders University, the University of Liverpool and the University of Arizona, the research will enhance the potential for improving wetland carbon sequestration across temperate and semi-arid ecosystems in Australia, the USA and Mexico.

"Apart from the restoration and protection of regional public wetlands, new housing developments could also include more water features - and even rural dams could be turned into effective wetlands through growing wetland plants and other small changes," Dr Lester said. 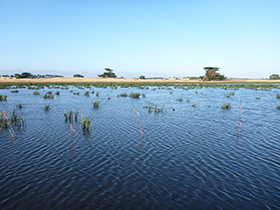 Swamped: We all understand the value of rainforests in protecting our environment, but Deakin scientists now think the ability of wetlands to store carbon could be up to 50 times more effective.