Indonesia's Vice President, Dr Boediono never set out to take on a leadership role in his country, he had thought his calling would be more as an academic than as a politician.

"It's by default in a sense that I've become a government official. "Some people thought I was a politician - well you have to be a bit of a politician to be Vice President, but basically, I'm not a politician."

Professor Lowe and Dr Purdey are interviewing alumni from a range of universities as part of a project analysing the long-term outcomes of Australian sponsored tertiary scholarships, starting with Australia's involvement in the Colombo Plan

The Plan, which involved the Australian Government sponsoring students from Asia to study at university in Australia celebrates its 63rd birthday today July 1.

Deakin researchers are investigating the networks students formed, the experiences they had and the connections they formed during their studies.

Dr Boediono said the original Colombo Plan had achieved a lot of benefits to both countries and both peoples.

"I think that the money the Australian Government spent on the Columbo Plan was money very well spent," he said.

"We always have affection for the country, the people.

"Despite some friction and so on the basic good will is there."

Dr Boediono applied for the Scholarship to study in Australia because he wanted to travel.

"We thought it was the most interesting thing to travel abroad," he told the researchers.

"We didn't care where we were put."

Dr Boediono said after a period of induction in Indonesia "the group of country boys and girls" arrived in Sydney for a short introductory course in English language and Australian culture.

"At the time it was summer and the one thing that surprised me was the clothes people wore," he said.

"I thought Westerners always wore ties but waking along the street we found it quite it relaxed people wearing singlets and mowing the grass and so on.

"It was a shock, but a pleasant one."

Dr Boediono was placed with a family in Sydney and then an Italian family in Perth while he attended the University of Western Australia for his undergraduate degree in Economics, where he met up with other Indonesian students as well as those from Malaysia and Thailand.

"The Malaysian students were much better organised than we were because they came in a block and they already had a government program and I think they had someone assigned to them," he said.

"We didn't have that, but we were quite close. And ironically, we were so close at the time of our confrontation policy with Malaysia.

"We debated but we were friends."

Dr Boediono formed a singing group which attracted the attention of the Indonesian Embassy in Canberra and they were invited to travel from Western Australia to perform for the President to celebrate Indonesia's Independence Day.

"We were known as a group of good singers, they knew that and invited us.

"It took many days, two days by train. It was elaborate, very elaborate.

"We sang on the train, we sang for the president."

Dr Boediono said the students had their challenges, particularly academically.

"To tell you the truth we had to make a very special effort just to be on board with the rhythm of the lectures and so on," he said.

"We were, at least I was, very far behind compared to colleagues who had studied at high school there.
"Even compared to the Malaysians. So we had to do extra work."

Dr Boediono said even though the lecturers were nice the students did the extra work on their own in the library.

The work paid off, Dr Boediono, now an expert economist, went on to do postgraduate study at Monash University attracted by its focus on Indonesian studies where he made friends with Indonesian experts Dr Herb Feith, Professors John Legge and Jamie Mackie.

"I was particularly close to Jamie Mackie because he was an expert on the Indonesian economy," he said.

"We talked quite often and he gave me some advice on the topic of my thesis."

Unfortunately Professor Mackey and Dr Feith have since died and Professor Legge was very frail, but Dr Boediono said he still maintained ties with colleagues from the Australian National University.

"I wasn't an expert student, I was the research assistant to the Professor, but I interacted with them, and we are still in close contact.

The original Colombo Plan and Australia's involvement in it is a particular interest of Professor Lowe.

"Although we often hear about the benefits of so-called 'people-to-people connections' between Australia and Asia, the research into this broad field remains surprisingly thin," Professor Lowe said.

"We were delighted Dr Boediono was able to give us some of his time for this project.

"He was one of the early pioneers and beneficiaries of the Plan and as our discussion revealed there were many layers to the relationships formed during his experiences as an international student studying in Australia." 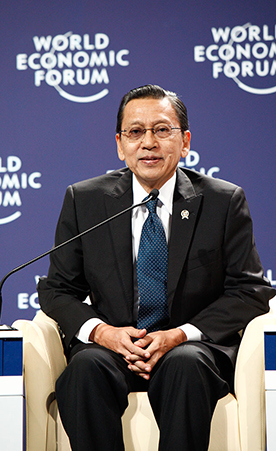