Double your portion sizes to get healthy: Deakin research

Doubling your portion sizes could be the key to a healthier diet, according to the results of a new Deakin study.

Deakin Business School's Professor of Marketing Chris Dubelaar worked with researchers in France and Australia to test if doubling the portion size of healthy foods increased consumption as it does with unhealthy foods, and if the amount of food eaten differed according to the eating environment.

The findings from Professor Dubelaar's study showed the influence food environments have on consumption – with factors such as portion size and even what we watch while eating having an impact on health-related behaviours.

The first part of the study involved 153 French university students who were given small or large servings of a healthy (apple chips) or unhealthy (potato chips) snack in a laboratory setting to eliminate potential social influences.

For the second study, 77 high school students attending a film festival were given a small or large serve of baby carrots as a snack. The students watched either a film about a restaurant that included many eating scenes or a romantic comedy with no food-focused content.

The researchers found doubling the portions increased consumption of both healthy and unhealthy snacks, meaning people could potentially increase their portion sizes to fill up on healthy food and avoid junk food.

In the second study, however, the portion size effect with the healthy snacks was influenced by the movie being watched, with the food-related film viewers eating less than those watching the other film – showing those participants who watched people eating on film felt less inclined to indulge themselves.

Professor Dubelaar said the study findings presented interesting insights into the potential for manipulating portion size as a way to increase healthy eating.

"Previous studies have found that people will eat more unhealthy food when presented with a large portion size," he said.

"The results of our current study tell us this portion size effect also holds true with healthy foods, which opens up the potential for adjusting portion size when trying to encourage healthier eating habits.

"For example, parents trying to get their children to eat more veggies could serve up larger portions. This would also work for healthy snacks such as fruit or any food you want someone to eat more of."

Professor Dubelaar said it was particularly interesting to find that during the food-oriented film, all participants ate the same amount of food from both the large and the small portions.

"This tells us that our food environment has an even larger impact on our consumption than we thought," he said.

"This also provides an opportunity for those seeking to control intake to consider their environment when they're eating to help reduce the effects of portion size."

Professor Dubelaar’s full study "Might bigger portions of healthier snack food help?" has now been published online ahead of print publication in the Food Quality and Preference journal.

The study was conducted by researchers at Deakin University, the Grenoble Ecole de Management, University of Technology Sydney and Macquarie Graduate School of Management. 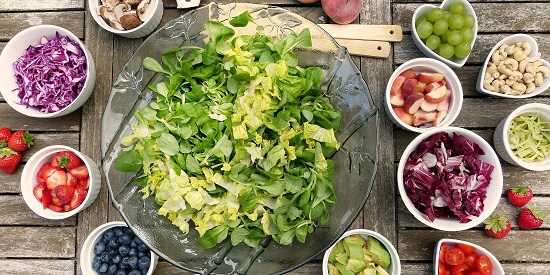