Fat found to be the new taste sensation

Media release
09 February 2015
There is conclusive evidence that there is a fat taste, according to Deakin University sensory science researchers.

There is conclusive evidence that there is a fat taste, according to Deakin University sensory science researchers.

In a paper published in the latest issue of Flavour Journal, the researchers with Deakin's newly formed Centre of Advanced Sensory Science have detailed the evidence for fat taste from diverse fields of science including molecular biology, neurobiology and sensory science. They found there is overwhelming evidence for the tongue's ability to detect fat, making it the sixth taste alongside sweet, salt, sour, bitter and umami.

"Research from animal and human studies provide conclusive evidence that there is fat taste," said Professor Russell Keast, head of the Centre of Advanced Sensory Science. "For fat to be considered a taste it must meet some strict criteria, and it does."

Fat does not provide the same distinct taste as sweet or salt, rather it elicits a sensation on the tongue, Professor Keast explained.

"It is a taste without an identifiable quality," he said.

"Fat taste is not like sweet or salty where there is conscious perception associated with eating sugar or sodium chloride (table salt).  Fat taste is unconscious, it is different from the food without the fatty acid but is difficult to describe."

The researchers believe the findings of this review, alongside the growing body of research into the connection between fat taste and obesity, provide insights that could prove invaluable in the battle to curb the world's growing obesity problem.

Fat is an essential component of a healthy diet but for many years has been viewed as an evil nutrient, spurning the growth of low fat foods industry.  History shows that many low fat foods have been introduced onto the market and failed.

"Fat has multiple effects in foods, it provides mouthfeel, acts as a flavour carrier and helps with flavour release," Professor Keast said.

"What we are saying is that in addition to those attributes, fat also activates taste receptors. If fat taste had been considered during low fat food development, perhaps there would not have been so many low fat failures.

"There is great potential for the food and health industries to develop new low energy products using the knowledge on fat taste that has been built up over a number of years by our group and other international research teams.

"Our previous research has shown that those who are sensitive to the taste of fat eat less.  This has become powerful knowledge as the food and health industries search for solutions to our growing waistlines."

The review, 'Is fat the 6th taste primary. Evidence and implication', is published in Flavour Journal .

The Centre for Advanced Sensory Science at Deakin University was established in 2015 to help the sustainable growth of the Australian food industry by being a provider of high quality sensory and flavour research, and training the next generation of sensory scientists. 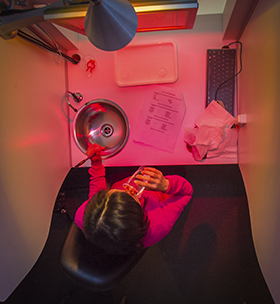