Biobanking and assisted reproduction could become a reality for Australia's much-loved koalas by leveraging the existing technology used to help humans conceive.

A detailed model, published today in the international journal Animals, reveals this would significantly help captive breeding programs to retain genetic diversity and drastically cut the costs currently required to deliver these programs.

Lead author and Post-Doctoral Research Fellow at Deakin's Centre for Integrative Ecology Dr Lachlan Howell spent years developing and analysing this robust model for various endangered species as part of his PhD research at the University of Newcastle.

Now having completed the study, Dr Howell believes the model offers koalas the most promise, for a variety of reasons.

"The beauty of applying assisted reproductive technologies to the koala population is that much of the foundation has already been laid, much of the infrastructure is already in place," said Dr Howell. "We've identified 16 wildlife hospitals and zoos across Australia that could act as nodes to collect koala sperm and help integrate assisted reproduction."

Integrating biobanking into the zoo and wildlife hospital network presents a cost-effective and financially feasible model for the uptake of these tools due to the technical and research expertise, captive koala colonies, and ex situ facilities that already exist across these networks.

"Recent advances have shown us that artificial insemination using fresh and chilled sperm works in koalas. The hurdle is trying to freeze sperm and make use of it. All that is needed now is more research and funding to tweak existing assisted reproduction technologies so that we can cryopreserve koala sperm, just like we do for humans," said Dr Howell.

While captive breeding programs are a powerful tool to save koalas, they face significant challenges of high costs and genetic diversity.

"These issues can also compromise survival, disease resistance, and the species' ability to adapt to changing environmental conditions from climate change.

"By using frozen sperm, we can reintroduce genetic variation into wild koala populations without having to relocate koalas. In New South Wales for example, koala populations are declining rapidly in some locations so they would greatly benefit from the introduction of bio-banked material from other unique populations to help manage genetic diversity."

Co-author and conservation scientist at the University of Newcastle, Dr Ryan Witt, said a koala biobanking and assisted breeding conservation program could future-proof the species, which faces extinction by 2050 without intervention.

"Currently, we have no optimised tools that can store live koala reproductive material, such as sperm," said Dr Witt. "So, we have no insurance policy against natural disasters like the 2019-2020 bushfires that threaten to wipe out large numbers of animals at the one time. If the koala population dies in these kind of fire events, there is no way to bring them back or preserve their genetics.

If cryopreservation is made possible for koalas, it will also open the door to recover and biobank genetic material from koalas who may have died in bushfires or been hit by cars so they can still contribute to reproduction and the population." 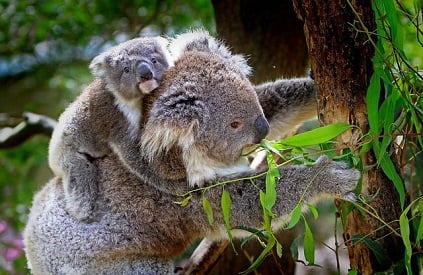