The Game of Thrones series' reinforcement of racist stereotypes through its portrayal of Eastern characters as barbaric, cruel and perverted exacerbates societal divides and plays into assumptions of Western superiority, research from a Deakin Middle East Studies expert has found.

Dr Hardy, who has spent years studying Middle Eastern society and media depictions of the region, recently published a research paper in the Canadian Review of American Studies analysing stereotypical depictions of the East in Game of Thrones.

He said there was little debate over the cultural impact of the series as a media phenomenon, but that its popularity and mass appeal also made its problematic depictions even more influential.

"While Game of Thrones may appear to offer an avenue of escape to an imaginary realm, it also reinforces the existing bigotries and preoccupations of our actual world," he said.

Dr Hardy said it was important to realise how fantasy and pop culture – in this case one of the most popular TV shows in history –can impact the real world by reinforcing stereotypes and playing into our expectations of other cultures and Western superiority.

"Despite the reputation of Game of Thrones as ground-breaking escapism, its depiction of Eastern people is anything but," he said.

"The series reinforces the link between Eastern cultures and depravity that's been part of the Western imagining of the 'Orient' for centuries – where people from the Middle East are depicted as 'fallen' compared to the more honourable people of the West.

"These same tropes appear over and over again in Game of Thrones – the West (Westeros) is shown as a 'good' culture of proud families, brave warriors and enlightened thinkers, while the East (Essos) contains threat, danger, and unpleasant practices."

"In the Game of Thrones series, the land of Essos acts as little more than an exotic alternative backdrop and as a kind of quarantine zone for the development of Daenerys Targaryen's story," he said.

"While the grand plot of the series involves conflict between dynasties and between humans and monsters, there is, for a long period, a struggle between the Western-liberal Daenerys and the despotic-barbaric Eastern cultures she finds herself in.

"You can see strong elements of the old colonial vision in Daenerys' actions as she makes her way through Essos, imposing her own ideology on the ‘wicked’ locals while proving her ability to lead. She’s the ultimate white westerner as civilizer, improver and breaker of primitive customs.

“While picking and choosing which traditions she finds acceptable to her own worldview and discarding or subverting those that aren't, Daenerys stamps her liberal Western values across the continent, and Essos serves to emphasize her benevolence and humanity by contrasting it with the brutality and injustice she encounters."

"All this sexual bondage and mutilation is an exercise in Orientalist box-ticking," he said.

"The greedy Easterner who’s prepared to inflict suffering in the name of profit is a classic racist Orientalist stereotype. And Daenerys’ liberation of the slave cities provokes resistance to change and rebellion, and then barbarism, sectarianism, and squalor when she departs.

“The idea that Eastern people couldn't govern themselves without a stern white parent taking the heavy and thankless task of overseeing them was a standard Western belief of imperial times."

Dr Hardy said the latest (and final) season of Game of Thrones was still dismissive of Eastern cultures.

"As a final indication of how relatively unimportant these Eastern cultures are in the grand scheme of the story, the Dothraki warriors are summarily disposed of in a foolhardy charge into supernatural darkness during the final season of the show," he said.

"Winning their loyalty was a plot point to show the leadership and benevolence of Daenerys, but once that was achieved they were reduced to meaningless cannon fodder.

"Ultimately even a ground-breaking fantasy series like Game of Thrones still relies on our built-in cultural beliefs and stereotypes about the East – convictions that have been reinforced by centuries of repetition in all forms of art and formed from our presumed cultural superiority."

Dr Hardy's full paper, "The East Is Least: The Stereotypical Imagining of Essos in Game of Thrones", was published in the most recent edition of the Canadian Review of American Studies research journal. 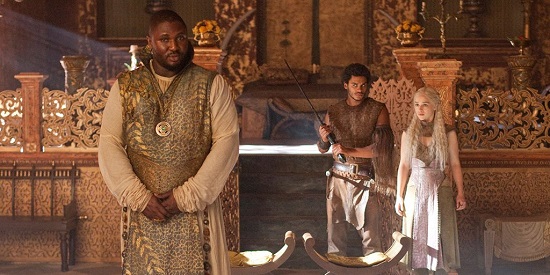