The Great Barrier Reef's hidden capacity to store huge amounts of carbon has been identified in a world-first study that has also revealed its potential to play a key role in climate change mitigation.

Researchers from Deakin University's Blue Carbon Lab in the School of Life and Environmental Sciences have, for the first time, calculated the Great Barrier Reef's blue carbon capacity and discovered the seagrass meadows and mangrove forests within the reef's coastal ecosystems store 111 million tonnes of carbon, or ten per cent of Australia's blue carbon stock.

"By calculating the blue carbon capacity of the Great Barrier Reef we can identify how many tonnes of carbon dioxide (CO2) could be offset each year by blue carbon systems and where opportunities for blue carbon storage might exist," Dr Costa said.

"Carbon credits can be generated by the reinstatement of tidal exchange, which is one of the main restoration strategies for mangrove forests and saltmarshes in Australia," Dr Costa said.

Blue carbon is organic carbon stored deep within the soils of coastal wetlands. It can remain undisturbed for centuries but coastal development, dredging and construction activities can release the carbon back into the atmosphere as carbon dioxide or greenhouse gases, contributing to global warming.

"Our models show that by restoring blue carbon ecosystems in 90,000 ha of land throughout the Great Barrier Reef catchments we could capture an additional five million tonnes of CO2 by 2100.

"In addition, rising sea levels could increase the carbon sink capacity by a further 20 per cent by 2100 in some regions.

"The blue carbon stock estimates in this project are conservative as they only include mangroves and seagrass meadows. More carbon is held in the 207,000 ha of saltmarshes within the Great Barrier Reef catchments, but we need more data from this ecosystem to accurately map its potential."

Queensland Blue was supported by the Queensland Government as part of the Pilot Projects Program of the Land Restoration Fund.

This initiative is a $500 million investment by the Queensland Government to expand carbon farming opportunities through land-sector projects that deliver additional environmental, social and economic benefits. The Australian Government is currently developing a blue carbon methodology under the Emissions Reduction Fund.

"We will continue this research thanks to additional funding from Qantas Future Planet and HSBC Australia. We will look at local changes in management strategies along the Great Barrier Reef catchment and examine how future environmental conditions are likely to influence blue carbon stocks in the region. This information is crucial to guide future policy and investments in blue carbon in the region," Associate Professor Macreadie said.

An interactive StoryMap of the research is available here. 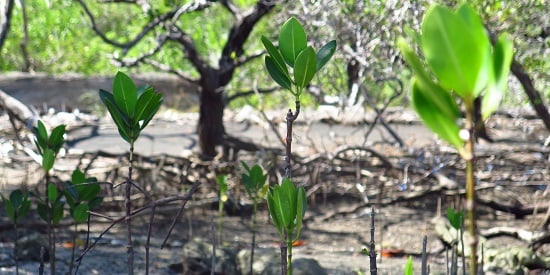