A new 'Fitbit for biomechanics' designed by Deakin University researchers is changing the lives of Australians from Parkinson's disease sufferers to golfers and horse trainers.

The result of a three-year research project by Deakin's School of Engineering, BioKin is a low-cost wireless motion capture device which is the size of a matchbox, weighs under 20 grams, and easily attaches to clothing.

Unlike other motion capture systems which track steps, sleep and heart rate, BioKin units monitor even the smallest movements of the human body, providing feedback on everything from a medical patient's rehabilitation to a golfer's swing.

BioKin can use a number of wireless 3D motion sensors to cover the full body and specialist software to capture data that can be easily accessed in real-time via a phone app, with online accessibility via cloud storage.

"BioKin was created to help doctors and clinicians better monitor the progress of patients with balance disorders, recovering from strokes, living with Parkinson's disease, or regaining movement after surgery," he said.

"The small, light units provide incredibly accurate data - pinpointing movement to a greater accuracy - that give a really clear picture of how a patient is progressing with their rehab.

"The units send the data straight to the patient and their medical team in real-time via a simple to use app.

"Patients can do their rehab at home, reducing the need to visit the doctor’s office or hospital. This lessens the strain on the medical system and saves time and money for patients, especially those living in regional or remote areas."

BioKin has completed preliminary trials and is currently undergoing rigorous and formal clinical trials for balance and movement disorders, wrist and shoulder rehabilitation, and is in secondary stage trials in major hospitals in Melbourne.

But Associate Professor Pathirana was also surprised that when the device hit the market earlier this year, it attracted interest beyond the medical sphere and into the sporting arena.

"Since BioKin hit the market, we've sold units to the Royal Melbourne Hospital and the Florey Institute of Neuroscience, and we have been in discussions with horse trainers who plan to strap the unit to a horse's leg to assess its range of movements," he said.

"And one of my own team members, an engineer and golf pro, has used BioKin to improve his green-side bunker shot, the toughest shot in golf. So we're looking at the device as a golf training tool and we intend to release BioKin for this application as well.

"By attaching BioKin units to the head of his pitching wedge, his forearm and bicep, he's been able to gather incredibly detailed and accurate data about his swing and make the necessary adjustments to see his handicap shrink even further."

Associate Professor Pathirana said that the uses for BioKin were sure to expand further as software developers got hold of it.

"We provide a developer interface for people and companies who are interested in developing software components for motion analysis," he said.

"Interest in BioKin has grown steadily since it was launched on the market, with plans for export to the Middle East in the coming months," he said.

"From Geelong to the other side of the world - it's a great example of local ingenuity changing lives all over."

Associate Professor Pathirana said he believed uses for BioKin were limited only by imagination.

"The great thing about this technology is that it is completely portable, adaptable, and empowers developers and researchers to venture in new areas of application," he said. 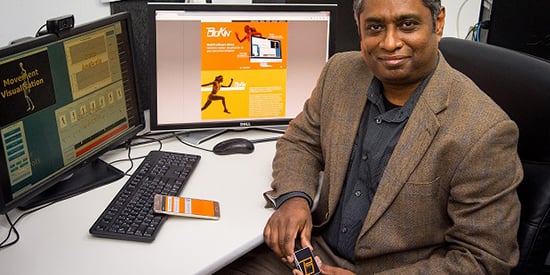