Hook, line and tagged by Deakin researchers over a decade ago

The importance of 'catch and release' angling and fish tagging research has been demonstrated with a Black Bream caught in the Glenelg River found to be tagged by Deakin University researchers back in 2012.

Black bream is a relatively slow growing fish, highly prized by recreational anglers, as well as an important research species for marine ecologists.

A 2012 research study, undertaken by a Deakin University Marine Biology student, involved tagging several fish and, in August this year, one of those fish was recaptured by Patrick Byrne, a South Australian recreational fisherman.

The tracking device showed the fish was caught and tagged on 19 August 2012 in Taylors Straight, South Australia, weighing 704 grams and measuring 38.6cm in length.

When Mr Byrne happened to snag the tagged fish in the Glenelg River - almost 10 years to the day after it had been tagged - it had doubled in weight to 1.4kg but measured only 44cm in length.

It's estimated that a bream takes approximately 10 years to reach the legal minimum length of 28cm to be kept by a recreational angler.

This means the bream that was caught is just over 30-years-old and spawned during the early 1990s.

It has taken a few months to track down the original research information due to the length of time between placement of the tag and recapture.

In 2012 Deakin researchers placed acoustic tags into some of the Glenelg River black bream population to record their movement, setting up listening stations at regular intervals along the river, which recorded when the fish swam past.

Deakin University Associate Professor of Marine Ecology at the Warrnambool campus, Dr Daniel Ierodiaconou, said researchers had been using tagging technologies for over a decade.

"This particular fish had an acoustic tag inserted in its gut cavity that at the time enabled researchers to understand fine scale movements and habitat preferences in the estuary," he said. "The identification number on the tag showed that the bream had been tagged a decade ago, which is fascinating."

"What was remarkable was how slowly the fish has grown over the 10-year period," said Mr Ryan. "That is a growth rate of just over half a centimetre a year."

Mr Ryan also said the recapture highlighted both the importance of recreational anglers on the waterways doubling as 'citizen scientists', and the collaborative work across departments and research organisations.

"These studies are important for river managers to help protect areas that bream frequently use but often that ends when a particular project finishes," Mr Ryan said.

"What's really great is the angler saw the tag and provided the information back to an authority – in this case the South Australian Research and Development Institute (SARDI) because he was from South Australia – and from there, it filtered its way back to the original research institute, Deakin University.

"Having that support from the angler is fantastic, but also the other organisations to ensure the information gets back to where it began."

Dr Ierodiaconou said thanks needed to be extended to Mr Byrne, as well as Dr Jason Earl, Research Scientist from SARDI’s Aquatic Sciences, for providing the re-capture information.

"This is a great demonstration of the importance of citizen science and how the capture of a tagged animal can fill important knowledge gaps in growth, survivorship and animal movement," he said.

Dr Ierodiaconou added that research into fish movements continued, with Deakin recently establishing a curtain of listening stations off the coast of southwest Victoria in the Bonney upwelling.

"This is enabling us to track tagged individuals with acoustic technologies filling an important gap in Australia’s Integrated Marine Observing system and the movement of fishes along our coast," he said. 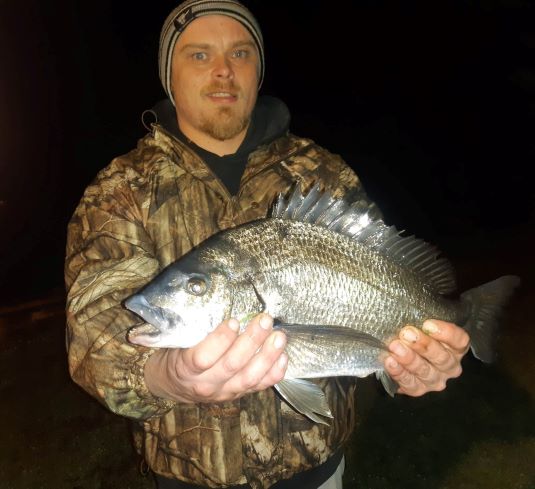