Non-native rats pose far more danger to wildlife than just spreading disease, with new Deakin University research showing they are high on a list of invasive mammalian predators that have contributed to more than half the globe’s bird, mammal, and reptile species extinctions over the past 500 years.

Introduced rodents, such as black rats and house mice, have the most widespread impacts of invasive predators worldwide, linked to the extinction of 75 species, including 52 birds, 21 mammals, and two reptiles.

The world’s most comprehensive analysis of the destruction caused by invasive mammalian predators was led by Research Fellow Dr Tim Doherty, from Deakin’s Centre for Integrative Ecology within the School of Life and Environmental Sciences.

The research team compiled an extensive database using 1,000 supporting references, along with information from the IUCN Red List of Threatened Species, to quantify the global impacts of invasive mammalian predators.

“Because of our study, we now know that invasive mammalian predators have contributed to the extinction of 87 bird, 45 mammal, and 10 reptile species – an astonishing 58 per cent of these groups’ contemporary extinctions worldwide,” Dr Doherty said.

“We also found that a further 596 threatened vertebrate species have suffered negative impacts from a total of 30 invasive predator species.”

Dr Doherty is now calling for the management of invasive predators to be a global conservation priority in the wake of the findings.

“Our research shows that in parts of the world, invasive mammalian predators are major drivers of species decline and extinction,” he said.

“Understanding the impacts of invasive predators is essential for biodiversity conservation.

“With this knowledge, we can design and prioritise management programs to protect threatened species and ultimately reduce the rate of global biodiversity loss.”

Dr Doherty said that while Australia had experienced a large number of species’ extinctions due to invasive mammalian predators, other regions had also suffered, particularly Central America and the Caribbean, the Madagascar region, and New Zealand.

Further, endemic island animals are most vulnerable to invasive predators.

“Animals that are endemic to islands such as New Zealand’s Kakapo (Strigops habroptila) and the Santiago Galapagos Mouse (Nesoryzomys swarthi), account for 80 per cent of the threatened species affected by invasive predators,” Dr Doherty said.

“The impacts of predators are particularly severe on islands because species there typically haven’t evolved alongside certain types of predators, so they’re naïve to the threat some introduced predators pose.

“Reducing and managing the impacts of invasive predators should be a global conservation priority, especially on islands, because species decline and extinction can have cascading impacts throughout an entire ecosystem.

“In Australia, feral cats and foxes have caused the decline or extinction of two thirds of digging mammals – such as bilbies and bandicoots – over the past 200 years.

“Without these digging mammals, reduced disturbance to topsoil has led to impoverished landscapes with little organic matter, low rates of seed germination and higher bushfire risk."

The research study, “Invasive predators and global biodiversity loss”, is published in the latest edition of Proceedings of the National Academy of Sciences (PNAS). 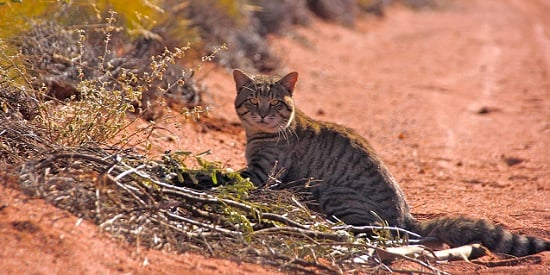