Researchers have developed a sustainable and highly lucrative way to address two big issues in the clean energy transition, reclaiming one of the most valuable elements from end-of-life solar panels and reconfiguring it to build better batteries.

More than 100,000 tonnes of end-of-life solar panels are estimated to enter Australia's waste stream by 2035.

Scientists from Deakin University's Institute for Frontier Materials (IFM) have successfully tested a new process that can safely and effectively extract silicon from old solar panels, then convert it into a nano material worth more than $45,000 per kilo.

This nano-silicon is then mixed with graphite to develop a new type of battery anode shown to increase lithium-ion battery capacity by a factor of 10, a critical breakthrough in energy storage technology.

Lead researcher Dr Md Mokhlesur Rahman said that for Australia (and the world) to address the enormous issue of solar panel waste and develop a successful recycling program to divert it away from landfill, scientists must find a way to harvest and repurpose the panels' most valuable components.

"Solar panel cells are fabricated using high-value silicon, but this material cannot be re-used without purification, as it becomes highly contaminated over the 25 to 30 years of the panel's life," Dr Rahman said.

"We have developed a process that returns silicon collected from used cells to greater than 99 per cent purity, within a day and without the need for dangerous chemicals. This thermal and chemical process is far greener, cheaper, and more efficient than any other technique currently on the market."

But it's the next step that's the real game-changer. The Deakin process then takes this regular-sized purified silicon and reduces its size to nanoscale using a special ball-milling process. Again, without the need for toxic chemicals.

The current market price for nano-silicon is about $45,000 per kilo, compared to about $650 for regular silicon, and it is in even higher demand. Not just for new battery materials, but also for use in the development of nano-fertilisers, innovative new methods for carbon capture, and on-demand hydrogen gas generation.

By recycling solar panels, the IFM team has found a way to make this seriously expensive material more accessible. They estimate their technique could generate US$15 billion in material recovery if extrapolated to the 78 million tonnes of solar panel waste expected to be generated globally by 2050.

The process is the result of years of research from a team led by Alfred Deakin Professor Ying (Ian) Chen, Director of the ARC Research Hub for Safe and Reliable Energy, which is based at IFM in Geelong.

"This Deakin developed technology - including purification, nano-silicon production and integration into new battery technology - is a giant leap forward in how we tackle the problem of solar panel waste," Professor Chen said.

"Silicon recovered from end-of-life solar panels can be a massive, sustainable source of nano-silicon to meet future demand for raw battery materials. Helping to power the homes, transport and communities of the future."

So far, the work has been supported with funding from the ARC and Sustainability Victoria, and the team is now talking with industry about plans to scale-up their process. For more information, email Dr Rahman at m.rahman@deakin.edu.au. 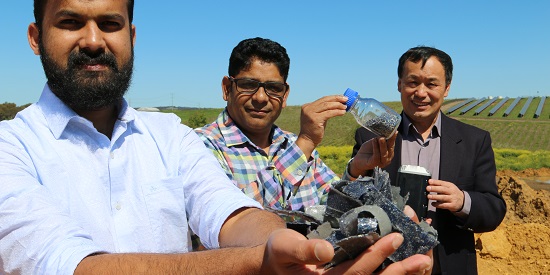