A new Deakin University study has found that climate change is causing some long-distance migratory birds to change their centuries-old ways as they fly between Australia and their breeding grounds in the Arctic.

Dr Meijuan Zhao from Deakin University’s School of Life and Environmental Sciences teamed up with volunteers from the Victorian Wader Study Group and Australasian Wader Studies Group to attach tiny geo-locator tracking units to 309 small shorebirds, known as Ruddy Turnstones, (Arenaria interpres) and monitor their annual migration between 2009 and 2015.

A total of 67 tracking units containing data were retrieved, revealing that the birds arrived at their breeding grounds an entire day earlier than in previous years, which Dr Zhao said was a monumental shift that clearly revealed the birds’ migratory behaviour was changing.

Dr Zhao, who completed the study as part of her PhD thesis, said the change was a likely response to climate and other environmental changes along the route known as the East Asian-Australasian Flyway.

“Every year, small shorebirds like Ruddy Turnstones migrate from the coasts of New Zealand and Australia and all the way up to Russia and Alaska to breed and then migrate back, stopping on the East Asian coast along the way – that’s a remarkable 20,000km round trip,” Dr Zhao said.

“The data we retrieved from 67 individual birds showed they were leaving Australia progressively earlier each year to potentially compensate for the rapidly advancing seasons in the Arctic, where climate change is amplified.

“This was a huge surprise as researchers believed that long-distance migratory birds, shorebirds included, weren’t capable of changing their migration behaviour so dramatically.”

Dr Zhao said this reflected the fact that long-term changes in the environment due to human disturbance, urbanisation and climate change meant that spring had progressively arrived earlier in the high Arctic.

“Many long-distance birds can’t keep up with this changing rate and its effect on food availability and this is leading to massive population declines in some long-distance migratory birds,” Dr Zhao said.

“The Ruddy Turnstones could have been making the same trek along the East Asian-Australasian Flyway each year for thousands of years.

“What we’re potentially seeing is evolution at work as they adapt their ways to make sure they reach their breeding grounds in time to find food and give their offspring the best chance of survival. If they arrive too late, the food has already declined so the timing is crucial.”

Dr Zhao said that up until now, scientists had lacked knowledge about long-distance migration, including where they stopped along the way and how they changed their migration behaviour from year to year.

“The data showed that individual Ruddy Turnstones are very site faithful along the migration route, using the same stopover sites between years, even though those sites may have degraded,” Dr Zhao said.

“This makes them very unlikely to shift to new stopover sites so it’s really important that we try to protect the traditional sites of this bird species which has experienced population decline.” 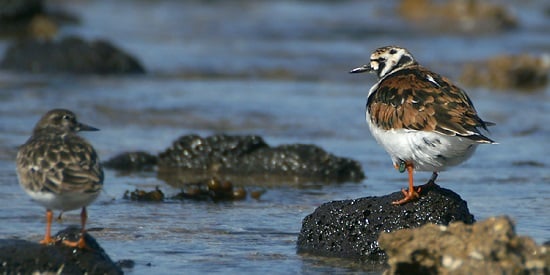