Pandemics, past and present, afford deeper contemplation of war

A Deakin University history expert says a crowd-constrained Anzac Day in 2021 brings to mind the impact of the Spanish Flu pandemic more than a century ago and could lead to a deeper consideration of how wars are fought on the battlefields as well as the home-front.

Dr Bart Ziino, a senior history lecturer in Deakin’s School of Humanities and Social Sciences, said a pandemic-affected Anzac Day in 1919 reminds us that a quieter day allows for greater reflection on how wars had been fought and endured both on the battlefields and in Australian homes.

"Anzac Day 1919 – as in 2021 – was a restricted affair, cruelled but not cowed by the persistent threat of the global Spanish flu pandemic that had already caused hundreds of deaths in Australia and millions worldwide," Dr Ziino said.

"What was obvious at the time, even if it is more difficult for us to see today, is that Anzac Day had to speak not only to the experiences of soldiers but to the painful experiences of those who had remained in Australia, waiting for and supporting those at the front.

"For those people, the First World War had been a torment.  The curtailment of major commemoration through the pandemic allowed for a more introspective opportunity to think about the effects of the war on the community.

"A quieter marking of Anzac Day this year might, strangely enough, help us to commune with those who spent Anzac Day in similar circumstances and to think of the two world wars especially as communal and heartbreaking experiences for those who had to endure them."

Anzac Day in the influenza pandemic saw Australians beginning their attempts to recover from an experience in which 60,000 Australians had died, and 150,000 more returned wounded.

"As much as Anzac Day provided an opportunity to acknowledge the service and sacrifice of soldiers, it was impossible to ignore the sacrifices of those who had spent the war worrying about their loved ones at the front and now had to pick up the pieces," Dr Ziino said.

"Without official services or a parade in Sydney, smaller communal services filled the gap, and they focused on those who mourned. Churches held short memorial services, while the Soldiers’ Wives’ and Mothers’ Association conducted an open-air memorial service in the Domain.  So too did women mourners attend a service they had been running since the war itself at the gates of Woolloomooloo wharf, the place where they had last seen their loved ones departing for war.

"In the quiet afforded by the pandemic, these people persisted in reminding Australians of how much the sacrifices of the war had been shared between the battlefields and those at home." 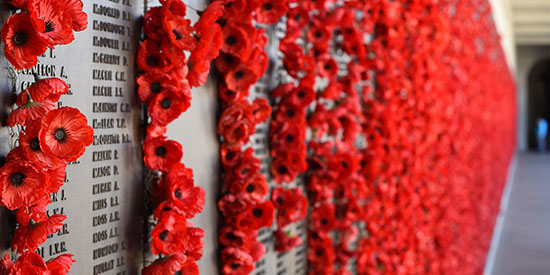 University hopefuls across Australia are entering a new era of campus orientation events as Deakin unveils its first Virtual Open Day this Sunday from 9am to 4pm.