Almost a third of Rainbow (LGBTQI+) families struggle to find books to share with their children that represent families "like theirs", according to preliminary survey results from a new Deakin study.

As World Pride month is celebrated this June, Deakin researchers want to learn more from LGBTQI+ parents, guardians and care-givers about their experiences with Rainbow family literature, with researchers so far learning there are significant gaps in LGBTQI+ children's books.

Deakin School of Communication and Creative Arts researchers Dr Helen Young, Dr Paul Venzo and Lara Hedberg said all respondents so far expressed a desire to read picture books reflecting their own family's situation, but some found this task difficult.

"Our preliminary survey results show about 30 per cent of respondents couldn't find a family 'like theirs' in a picture book, even though 100 per cent said doing so was important to them," Dr Young said.

"While children's picture books representing queer parents have been around since the late 1970s – which is earlier than many people expect – they haven't evolved much over this period to represent families from a variety of cultures or backgrounds.

"On top of that, it's hard to find books featuring LGBTQI+ families online unless you already know the titles, and the ones that do exist mostly come from North America. There are a few that are well known and often come up in searches, but it can be hard to find more.

"This means that for many people there's a very narrow range of representations of the diversity of rainbow families, and the books that do exist are often not easily located because there's no consistency in how they are categorised in library catalogues or referred to online."

Dr Young said representation in literature and popular culture was important for Rainbow families, with 83 per cent of respondents stating they couldn't find a family like theirs in anything else aimed at young children, such as TV shows.

Dr Young and her colleagues invite all Rainbow parents, guardians and caretakers to participate in the survey until July 31.

For more information, or to take part, go to: https://researchsurveys.deakin.edu.au/jfe/form/SV_e9cl8tnoAkUG4FT 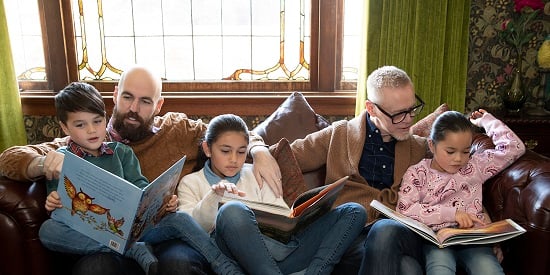