When the world discovered new French President Emmanuel Macron was married to a woman 24 years his senior, the age gap set global tongues wagging because it bucked a trend that Deakin relationship expert Associate Professor Gery Karantzas says can be explained by science.

Associate Professor Karantzas said there were scientific explanations for seeking a significantly older or younger partner, but Macron's situation shattered the usual set-up with the man as the older one in such relationships.

"When we look at the notion of age differences in romantic couples from an evolutionary psychology perspective we find that the qualities we look for in a partner relate to reproductive fitness," he said.

Associate Professor Karantzas, director of the Science of Adult Relationships (SoAR) Laboratory within Deakin's School of Psychology, said these two priorities could hold differing weights for men and women.

"We know that while men and women both highly value warmth and trustworthiness, women value good investment more, so place greater importance than men on status and resources," he said.

"With women being the child bearers, the investment is very high on their behalf (time and effort in child rearing), so they are attuned to looking for a partner who will also invest love, time and resources into a relationship and family."

This is where the attractiveness of an older man could come in, Associate Professor Karantzas said.

"The building of resources takes time, hence most people won't have a large bank of resources until later in life. This may explain why some women who place a premium on status and resources, may be attracted to older men."

In comparison, there's also some science to the stereotype that men are more focussed on looks.

"For men, they value attractiveness and vitality more so than women because from an evolutionary standpoint, youth is associated with reproductive fitness in women," Associate Professor Karantzas said.

"That is, younger women are evaluated as more fertile. Given that men can't bear children, evolution suggests that men are attuned to younger women as it enhances the chances of having healthy children in the future."

These kinds of age gaps are well documented when it comes to Macron's peers.

US President Donald Trump is 25 years older than his wife Melania, and ex-Italian PM Silvio Berlusconi is engaged to a woman 49 years his junior.

"While the precise reasons may be a mystery, people do vary from the norm and from each other; this is referred to as individual differences and something we as psychologists study a lot," he said.

"Aspects relating to how we interact and take in our society, social norms, and our own relationship histories and experience are just some examples of how individual differences can have us act in ways that seem paradoxical to norms or expectations."

Associate Professor Karantzas said there was really no reason couples with age gaps of any kind couldn't have long and successful relationships, as long as they shared similar values and goals.

"Where issues do arise is when one partner wants a family, but the other is biologically older, and hence, may have difficulties or challenges with conception," he said.

"Likewise, later in life, a large age gap may yield complications in terms of one partner dealing with chronic health issues that are somewhat tied to a certain age, while the other person has no such issues because they are younger.

"So it's not about age as such, rather the things that are related to age that may, or may not, impact on a relationship."

As for the "half-your-age-plus-seven rule", much touted as the formula for working out the extent of an acceptable age gap, Associate Professor Karantzas said that was rubbish.

"There is no basis for such statements," he said. "I suspect this is the figment of some silly person's imagination." 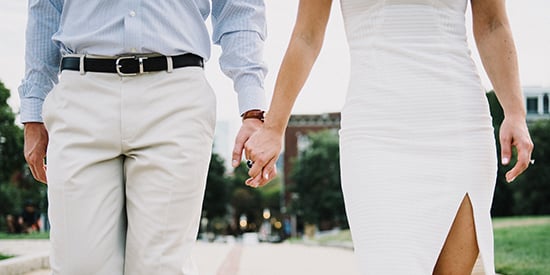