A Deakin University scientist has discovered two new species of millipedes, each smaller than a grain of rice but which play an important role in the breakdown and decomposition of plant litter.

Cuong Huynh, from Deakin's School of Life and Environmental Sciences, described the new species in a paper recently published in the Australian Journal of Zoology.

The pair belong to a group of minute 'pincushion' millipedes, so named because they are covered in body hairs that look like tiny pins sticking out from their bodies.

Mr Huynh said it was long thought that there was just one species of the Phryssonotus millipede found in South Australia and formally described in 1923.

"But in my recent study, specimens were collected from different regions and they didn’t all look the same; they had varying body lengths and the patterns formed by their body hairs also differed," he said.

"I found three typical patterns of body hairs among the specimens I collected: a trapezoid, T-shape, or dark banding. The length-to-width ratios of their body hairs also differed."

But Mr Huynh said looking different wasn't enough to confirm that there was actually more than a single species of these animals in Australia. He needed more evidence and that was where the animal's DNA came in.

Mr Huynh looked at a gene that's frequently used for separation of species called CO1 to confirm that there were indeed three different species of Phryssonotus.

He then had the honour of naming the two additional species, but the 'Huynh Millipede' was ruled out by scientific protocol. Instead the two new species were named for the geographic area they can be found in.

Mr Huynh said millipedes' distinctive feature was that they had two pairs of legs on most body segments, but they ranged in both body shape and size.

"Common garden millipedes have an elongated body shape, or they can have a rounded body shape as seen in the pill millipedes," he said.

The world's longest millipede is the African giant millipede, with a body length of more than 30cm. But the millipedes Mr Huynh discovered sit at the other end of the spectrum, with a body size of less than 4mm.

"Their exoskeleton is soft and they don't have the chemical defences present in other groups of millipedes. Instead pincushion millipedes are covered with hair like structures called trichomes that are used for nest building and defence," he said.

Mr Huynh said pincushion millipedes could be found in leaf litter, under tree bark, in caves, as well as in bird and ant nests. Their geographic distribution ranges from the tropics to the Arctic Circle.

"They help recycle the litter on the forest floor so nutrients can be fed back to the ecosystem," he said.

"So even though they are very small, they provide a really great indicator the health of the forest they belong to."

Mr Huynh said just one or two scientists globally studied these tiny creatures, and there could be dozens of species still undescribed in Australia alone.

"Most species were described in the last century by French and Italians based on limited specimen samples, so our finding is certainly novel," he said.

"There is limited information out there on these species, and consequently they are often looked over.

"By describing these species I'm hoping to help progress scientific study, giving other scientists who might come across these animals access to some information to help identify them." 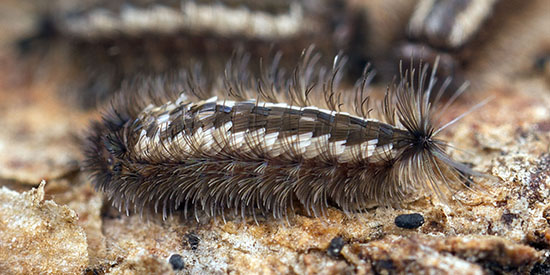