Scientists show supersizing vegies could be key to kids' consumption

In a first-of-its-kind randomised controlled trial, researchers from Deakin's Centre for Advanced Sensory Science found that children ate more carrot when given them whole, as opposed to a serving of the diced vegetable.

The study - recently published in the journal Foods - gave 72 primary school aged children a 500g box of peeled whole carrots on one day and the same amount of diced carrots on another day.

On both days children were given 10 minutes to eat as much of the carrots as they liked.

Researcher Dr Gie Liem, a senior lecturer in Deakin's School of Exercise and Nutrition Sciences, said the results showed that when given the whole carrots, many children consumed them for longer, and usually ate one whole carrot.

"On average this meant they ate about 8 to 10 per cent more of the whole vegetable, by weight, than when given diced carrots to try," Dr Liem said.

"This shows that if parents want their children to consume vegetables, especially as a snack food, whole might be better than diced.

"This is easier for parents too, as they can just put a whole carrot in the child's lunchbox."

Dr Liem said research like this was important as less than 10 per cent of Australian children met the recommend guidelines of five servings of vegetables per day.

"We're trying to give parents an easy solution to something that's a great concern," he said.

"High vegetable consumption during childhood is important for children's optimal health and development, and the prevention of obesity and associated chronic diseases later in life.

"That means it's important to provide vegetables not just on one occasion or mealtime, but throughout the day, and snacks are perfect for that."

Dr Liem said the study used a ten minute time limit to mimic real-world situations, like school recess, where children may only have a short break to eat their snacks.

The study's results are in line with other research that shows large unit sizes increase food consumption.

"Potentially these results can be explained by unit-bias, in which a given unit creates a consumption norm, which tells consumers how much they should eat," Dr Liem said.

"In this case, children consumed one whole carrot (one unit) when presented with whole carrots, suggesting that once children started eating a whole carrot they were likely to finish it."

Dr Liem said conversely, unit size had previously been shown to be useful in limiting consumption of unhealthy snack foods.

"For example cutting up a block of chocolate is smaller pieces reduces chocolate consumption," he said.

"But to our knowledge, ours is the first study with children that suggests unit bias can be used to increase consumption of healthy foods." 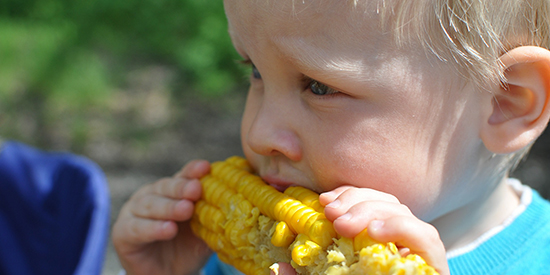